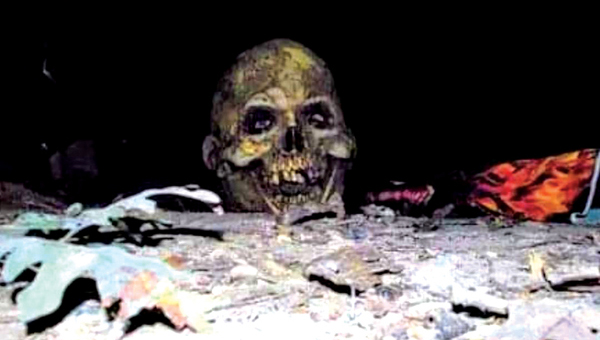 Characters come from every corner, even the ground to create a scare!

Face your fears this spooky season.
The Haunted Forest in Elizabethton kicked off their spooky season last weekend. There are three attractions: a haunted forest, a zombie laser tag maze and a hayride led by Beetle Juice. The Haunted Forest runs these three attractions every Friday and Saturday night throughout the month of October.
The scenes depicted play on phobias.
“We play on everyone’s phobias,” explained Candice Short, owner. “We’ve got the spiders, we’ve got the clowns, we’ve got the creepy doll house, we’ve got the chainsaws. It’s pretty cool.”
Short described characters coming out from every corner, and yes that includes from under the ground.
The spooky attraction kicked off their season last weekend. Short said it was met with a positive turnout.
“We probably had the best opening weekend we’ve ever had,” she said. “It was great.”
According to Short, among the attendees were families. She described this attraction as being something fun and scary for families to enjoy.
This successful opening comes only a few months after there was uncertainty over whether attractions like this could open at all due to the pandemic. Ultimately, attractions like this were allowed to open on the grounds of not adding anything new.
Short said the attraction, while fun, is following guidelines. Masking is encouraged and there is social distancing in place. For example, there are limited seats on the hayride with Beetle Juice.
She went on to describe how important attractions like this are for the community after a year like this, noting that getting out to have fun is a great way to relax, aspects offered in addition to fear at this location.
“People need to get out and enjoy themselves,” she said. “Being an outside attraction, we allow people to do that.”
In addition to spooky scenes and activities, there are spots to eat and even roast marshmallows as well. In the spirit of election season, people can also cast their votes for President Trump and Vice President Biden.
On Halloween, for the first two hours, kids 12 and under can come trick-or-treating and see their favorite characters in each scene.
The attraction now typically has over 80 volunteers and stretches over 4.5 acres.
It all began 14 years ago.
“It all started 14 years ago, two weeks before Halloween,” said Short. “We decided to do a little haunted trail. We had nine people, 12 scenes (some of us running and doing multiple scenes) and it was family run.”
While no details have been released, there are plans for something special next year on the 15-year anniversary.
The attractions (zombie maze and haunted forest) are $10 per person each; the hayride is included in this. A special including all three is being offered now for $17 per person.
Hours of operation on Friday and Saturday are from 7:30 p.m. to 11 p.m. at 172 Big Springs Road.
For more information and for prepaid tickets, check out their Facebook page or call 423-213-6122.
“If you want to have a nice family evening, be scared and have fun, bring the family out and enjoy,” said Short.