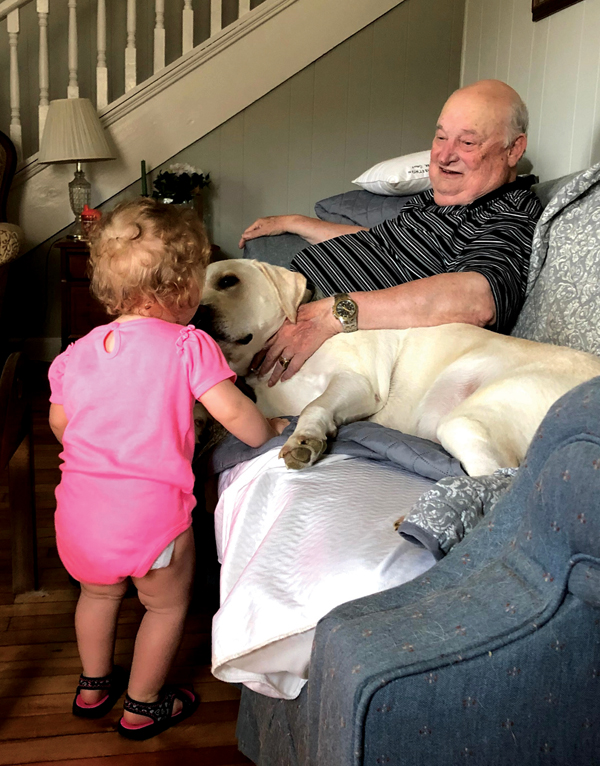 Lanny Smith with his great-granddaughter, Hallie Ellen, and his dog, Oscar.

It’s been said: Put yourself in a cop’s shoes and chances are you won’t like what you see in your face.
Lanny Dale Smith spent most of his life in law enforcement and he walked where most only dare to go — crime scenes, courtrooms, and even jail cells. Law enforcement was not Lanny’s first job or first love. His first was a teacher, but was later recruited by the Federal Bureau of Investigation, serving as a special agent for 24 years in Kansas City, Knoxville, and Johnson City. In addition to his work with the FBI, Smith served as a police instructor for local law enforcement agencies and after retirement returned to his love of teaching as an adjunct faculty member of Northeast State Community College. He later served as the college’s first Director of Safety and Security while continuing to teach at the same time. He helped start the college’s criminal justice curriculum.
Smith could never get away from teaching no more than he could law enforcement.
A resident of the Southside Community, Smith drew up on a dairy farm in southern Indiana, the eldest of four children. He joined the U.S. Army straight out of high school, and was sent to Fort Hood, Texas. He later attended Baylor University, receiving a degree in history. He began his teaching career in Killen, Texas.
“Lanny often said going to college and getting his degree was the best decision he ever made,” said his wife, Teresa. She said his three siblings went on to become teachers, also.
Smith retired from the FBI at the age of 50. “He had only been retired two months when he had his first heart attack,” Teresa shared.
“However, his love for learning and teaching remained with him, leading him to complete his studies for a Master’s Degree at East Tennessee State University. He was a gifted teacher,” his wife said.
“Lanny was also a servant at heart. He enjoyed helping people, and being there for his students, for his fellow church members, and co-workers. One of his greatest qualities was his kindness and love for those around him. His favorite Bible verse was Heb. 3: 2. ‘Be not forgetful to entertain strangers for thereby some have entertained angels unaware,’” Teresa shared.
She noted that Lanny’s faith was a very important part of his life. “He was a committed Christian. Before we were married, Lanny was a very active member of Central Baptist Church in Johnson City. After we met and married, he began attending the Episcopal church with me, and later we began attending St. Peter the Apostle Anglican Church in Kingsport. Lanny lived his Christian faith day in and day out. He never wavered from his Christian beliefs,” said Teresa.
Lanny also enjoyed being with friends and enjoyed sports, whether it be golfing with his father-in-law, Harry “Sonny” Murray, or attending UT football and basketball games or watching NFL football or major league baseball on television. Teresa shared that Lanny was a big fan of the Cincinnati Reds and Dallas Cowboys. “My first and only time I ever attended a major league baseball game was when the Cincinnati Reds played in the World Series and won the pennant. Lanny and I attended and he was ecstatic when the Reds won,” she shared.
He also enjoyed playing church league ball. “He really followed all sports and was so disappointed this past spring when March Madness was cancelled due to COVID-19,” said Teresa.
Lanny and Teresa lived in her family’s homeplace on Southside Road and he had spent many happy hours planning and building a new barn, incorporating materials from the original barn. “Lanny was a lover of history as much as he was everything else,” Teresa said.
Lanny Dale Smith died this summer at the age of 77. In addition to his wife, he was survived by a daughter, Michelle Smith Phillips, and her husband, Michael, two grandsons, and a great-granddaughter, as well as a host of friends.
Lanny Dale Smith will long be remembered for his many loves and interests and his service to his country, community, church, and the people he surrounded himself with. He was an A-one person.

Barrett vows to interpret laws ‘as they are written’