BY IVAN SANDERS
STAR SPORTS EDITOR
ivan.sanders@elizabethton.com
GREENEVILLE – The third week in October normal means Tennessee and Alabama as well as Elizabethton and Greeneville. The Cyclones handled their part of the equation as they whooped the Greeneville Greene Devils by bursting loose for a 28-0 second half offensive onslaught that made a close game a laugher.

The only part that the Greene Devils won in the game was the number of helmets they jerked off the Cyclone players head by a 9-1 margin no thanks to the officials.

After taking a slim 16-10 lead to the locker room, the Cyclones regrouped and looked like a bunch of jaguars with their ears pinned back in the second half.

Elizabethton hit the board first in the opening half when Jake Roberts hauled in a 68-yard pass from quarterback Bryson Rollins for a 7-0 lead after a Sean Smithdeal point-after was good.

Greeneville pulled even 1:09 later after Nick Iezzi set the Greene Devils up in great field position on the kick following the Cyclone score. Iezzi was rewarded for his effort as he burst over from the one-yard line to knot the game at 7-7 after Cooper Graham’s PAT.

Smithdeal pushed the Cyclones back out front in the second quarter when he booted a 26-yard field goal to make it a 10-7 game in favor of ‘Betsy.

Graham matched Smithdeal’s effort with a 20-yard field goal to make it 10-10 with 1:13 left before the break.

What Greeneville didn’t take into consideration was the fact they left to much time on the clock for the Cyclones as Elizabethton quickly made a long field short as Rollins would roll into the end zone with nine seconds left to play.

Smithdeal’s kick was wide and the Cyclone took the 16-10 lead to the locker room.

The second half was a thing of beauty for the Cyclones and Cyclone Nation as the Rollins to Roberts connection made contact once again on a pass that many thought was intended for Parker Hughes but zipped over Hughes head straight into the waiting arms of Roberts for a 53-yard scoring toss.

That score opened the barn door wide open as Elizabethton went on to add a six-yard run from LaDarian Avery, a two-yard Rollins scamper, and another Rollins nine-yard run to go along with four Smithdeal PAT’s to give the final margin of victory,

For the game, Rollins was 15-of-22 passing for 230 yards and two scores and carried the football for 22 times for 144 yards and three scores to continue building his case for the Class 4A Player of the Year in Tennessee.

Roberts was on the receiving end of four catches for 132 yards and the two scores. Hughes added six receptions for 56 yards with Braden Holly catching three balls for 24 yards.

The Greene Devils were held tightly in check by the Cyclone defense led by Trenton Taylor, Deuce Morton, and Cade Russell who snagged an interception and a total team effort defensively.

Greeneville only had 180 yards of total offense with 40 of that coming in their final drive against the Cyclone junior varsity. Scat back Mason Gudger had 17 carries for only 71 tough yards on the night.

The win gave Elizabethton (8-0) their 23 straight win dating back to the start of 2019. They will be on the road Thursday at Sullivan South for a 7:30 pm kickoff due to fall break. 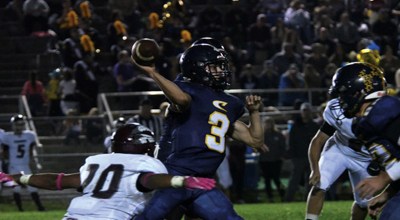 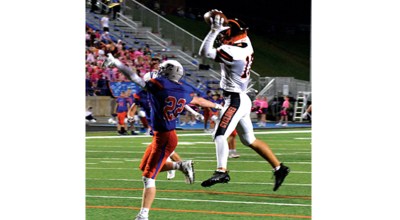 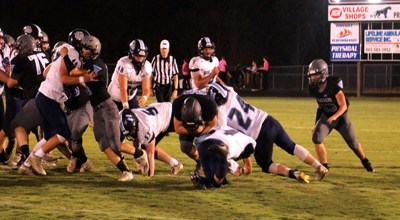 Bulldogs fall to Rebels in a late-game thriller, 35-31