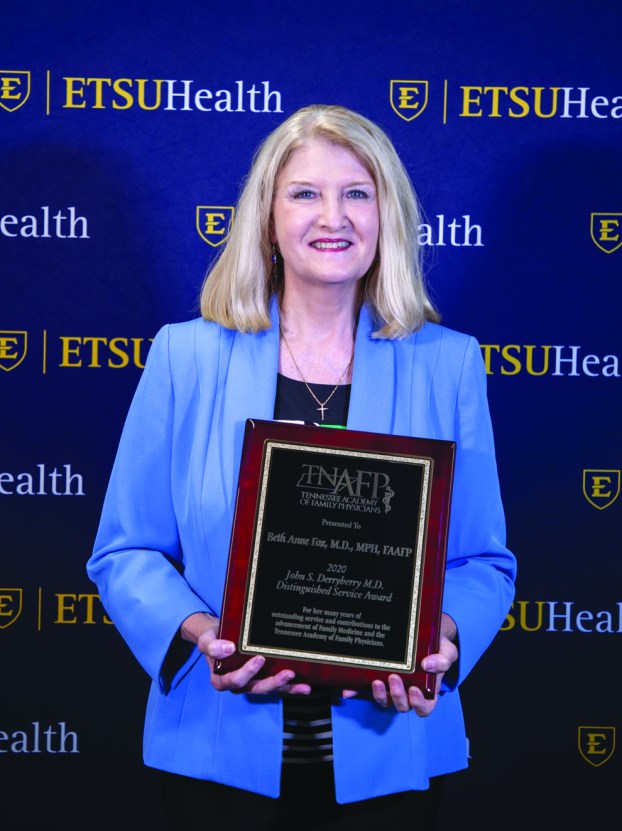 JOHNSON CITY – East Tennessee State University’s Dr. Beth Anne Fox received the 2020 John S. Derryberry M.D. Distinguished Service Award, presented by the Tennessee Academy of Family Physicians.
Fox serves as associate dean and chief of staff at ETSU’s Quillen College of Medicine.
The John S. Derryberry M.D. Distinguished Service Award is given to persons who deserve recognition of their outstanding service or contribution to the advancement of family medicine, to the Tennessee Academy of Family Physicians (TNAFP) or to the public welfare on family medicine’s behalf.
The award is usually presented in person at the TNAFP Annual Assembly and Congress, but the event was cancelled this year due to COVID-19. Instead, the award was presented to Fox at ETSU by Dr. Jim Holt, professor and associate program director at ETSU Health Family Medicine Johnson City.
“Dr. Beth Fox has served ETSU Health Family Medicine and the Quillen College of Medicine with distinction for nearly 16 years,” Holt said. “In addition to her impressive career at ETSU, Dr. Fox has also served the TNAFP with energy and dedication.”
Fox has served ETSU Health Family Medicine in multiple positions over the years, including program director and vice chair, overseeing all three ETSU Health Family Medicine residency programs. She transitioned to her current role as Quillen’s associate dean and chief of staff in 2018.
Her service to TNAFP includes her role as president in 2015-16. This past year, she chaired the Annual Conference Program Planning Committee for the second time and acted as alternate delegate to the American Academy of Family Physicians.
“I am fortunate to have found a career that has offered me so much,” said Fox. “I am blessed to be recognized for sharing what I believe to be the best medical profession one could choose. It is through family medicine that I found my love of teaching; found a way to be of service to the medically disadvantaged and marginalized; and to be an advocate for medical education, my fellow physicians, and the citizens of Tennessee, especially those in rural communities.”
The award is named in honor of the late Dr. John S. Derryberry, Shelbyville, who served the TNAFP and AAFP with honor and distinction from 1964 until his passing in 1998, having served as AAFP president in 1979. Nominees are not required to be members of the Tennessee AFP, but nominations must be made by a Tennessee AFP member in good standing.