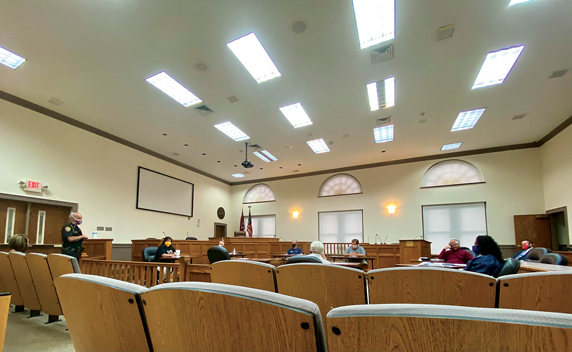 Brittnee Nave/Star Photo The meeting took place at the Carter County Courthouse, social distancing and masking were in place.

A workshop to discuss animal control was held at the Carter County Courthouse on Thursday evening.
The meeting began with Chief Deputy James Parrish. Parrish explained the need for the Carter County Sheriff’s Department to withdraw providing officers for animal control. According to Parrish, staffing issues since June have made this especially difficult.
‘We just don’t have the bodies,” he said.
Parrish explained that while they support the shelter and would love to continue helping, they cannot. He concluded by saying that they would have to withdraw from the responsibility at the first of the year.
Posada spoke next during the workshop with a proposal in hand. Posada had done research prior to the workshop, consulting with neighboring areas about their animal control approach. Posada included the estimates for hiring two animal control officers, broken down into six months and a year. This proposal included everything from costs of overtime pay to equipment and maintenance.
“It’s not going to be cheap for the shelter. It is a horrible headache for anybody who has it, but it is a service that is absolutely needed for our community,” she said.
After looking over Posada’s proposal, attendees began discussing ideas and asking questions. Questions ranged from authority to the role of ACOs. Posada said whoever this would fall under 911 would be the outlet to call. She also spoke on penalties given out in surrounding areas to repeat offenders, which helps pay for animal control. Most of these penalties are state laws.
Posada was open to suggestions and dialogue, noting the role and duties vary, but the job is very much needed.
Chief of Police, Jason Shaw, spoke during the workshop on the amount of animal control calls they have received. He said this year there have been 405 calls, 37 of which became police reports. He also elaborated on city ordinances regarding animals and fines.
Throughout the meeting everyone from the Chair of the Animal Control Board, Michael Barnett, to Interim Mayor, Patty Woodby, agreed that the responsibility, with help in finding a solution and a smooth transition, needs to go back to the shelter.
Posada elaborated on training needed for an ACO, noting the need for it to be hands on rather than taking a test. She suggested shadowing, etc. to help.
Proposals like constables stepping in as officers were mentioned at one point by Commissioner Acuff during the meeting. There are 16 in total. Difficulties with this arose with the Deputy Chief explaining their lack of insurance as well as Woodby pointing out radio access issues.
Throughout the suggestions and dialogue, Posada stated her gratefulness for the help of the officers. She also addressed threats that have been made to the shelter, from angry calls to people showing up on edge. She stressed that a solution is absolutely needed, and the shelter would not be ready to take on animal control before January.
After agreeing on the proposal to hire two ACOs for the six month plan, next year would potentially bring in a third ACO and two part-time as well due to risk of burnout on the job.
Ultimately, it was decided that the proposal will be presented at upcoming meetings. The money needed to move the ACO positions from the sheriff’s budget to the shelter’s will be presented at the Animal Shelter Board’s next meeting (Nov. 9) for approval, then the city council (this will go through two readings) and finally the commission (animal regulations, which allow ACOs to give out fines will also go to the commission).

BY IVAN SANDERS STAR STAFF ivan.sanders@elizabethton.com Even with a wind chill that caused the toughest golfer to give a shudder,... read more