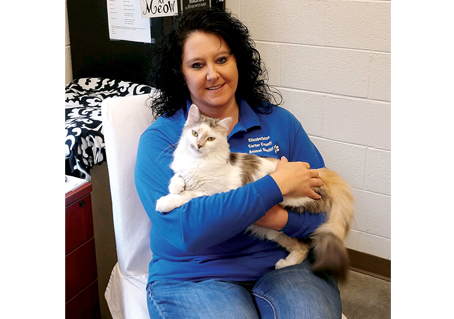 File photo Posada urges the community to report animal abuse whether you see it or suspect it.

The Carter County Commission rejected a resolution aimed at giving Animal Control Officers the authority to enforce state laws during their November meeting on Monday evening.
This rejection comes after a special called workshop in October focused around resolving issues surrounding animal control and the Sheriff’s Office no longer being able to provide the service. It was agreed at this meeting that the responsibility would go back to the shelter with the solution of hiring Animal Control Officers.
During this special called meeting, five commissioners were reportedly in attendance.
“We had support with our special called meeting, we had support with our budget meeting…and then we got to the Carter County Commission meeting,” said Shannon Posada, director of the shelter.
According to Posada, the shelter regularly gets complaints from people in the community over animals, from attacks to running at large.
“This is not fair to our community, this is not fair to our pet owners, who pay taxes and they can’t even walk down the road without having to worry about something jumping on their dog or biting them,” she said. “We want the laws fair for everyone in the county.”
Posada explained that the entire purpose of the resolution was to enforce state laws, which are already laws. This would have given an animal control officer the ability to enforce this.
Posada expressed her disbelief over the resolution being so widely rejected. She noted the support she received from those who did attend the workshop and budget meetings.
“We had only five commissioners attend that workshop where commissioners could’ve asked their questions, knowing there was going to be a vote,” she said. “Instead we get to a commission meeting and this is where they throw all their questions and shoot it down. It seems like we have this backwards.”
During the commission meeting, the resolution was heavily critiqued by commissioners. Remarks included dubbing aspects of the proposal “crazy” and “overstepping.”
Posada explained that the shelter staff taking on this role themselves is taking a toll.
“We do everything we can to protect these animals,” she said. “In return, we don’t have a Carter County Commission that will work with us to pass this resolution to even get an animal control officer to be able to enforce state laws.”
Disagreements brewed earlier this year over rumors surrounding a similar resolution. Posada stressed that hunters, etc. were never targeted by this resolution, and the statement that she was is an outright lie. Posada explained this to angered people who had believed rumors, only for them to understand once she explained.
Posada said there is no Plan B.
Posada said she has done all she can do, and wondered who even read the resolution. She said there is no solution at this time after all the work poured into this shot-down resolution. She went on to say that while she wants a working relationship with everyone, she feels there is no support for the shelter. She recalled commissioners voting against the now successful Feral/Community Cat Spay and Neuter Program several months back as an example, which is free.
Posada stressed she is after no one in this resolution. Rather, she and her staff wanted to help.
“We only want to help our community and the animals in it,” she said. “We are their voices. We want to make sure they are fed, secure and protected.”
Posada said now it’s the community’s turn to voice their concerns by letting the commissioners know what they think. She said as of Tuesday morning, she has already received calls regarding reactions.
The final vote on the resolution Monday evening left 15 commissioners voting against it and eight in favor.
These 15 commissioners include the following: Willie Campbell; Mark Blevins; Nancy Brown; Mayor Patty Woodby; Brad Johnson; Mark Tester; Charles Von Cannon; Isaiah Grindstaff; Jerry Proffitt; Austin Jaynes; Ross Garland; Ginger Holden; Layla Ward; Gary Bailey; Aaron Frazier.

The Carter County Commission’s November meeting consisted of heated discussions and a resignation on Monday evening. Among the more lengthy... read more