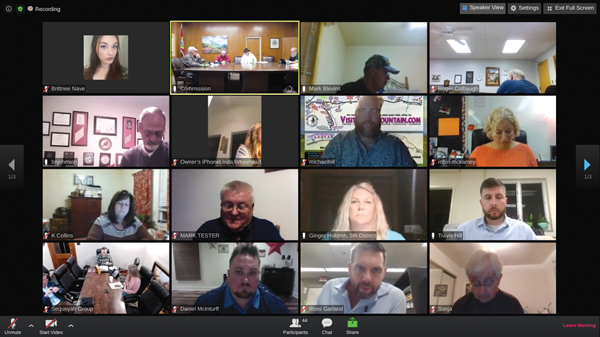 The Carter County Commission’s November meeting consisted of heated discussions and a resignation on Monday evening.
Among the more lengthy topics of discussion included a resolution that would give animal control officers the authority to enforce state laws. This was detailed in a 13-page proposal.
County Attorney Josh Hardin explained that this was a civil remedy and not criminal.
Commissioner Sonja Culler made a motion to pass the resolution, which was seconded by Commissioner Mike Hill.
A heated discussion followed, from disapproval over the resolution to questions over how it would work.
In the end, 15 commissioners voted against the resolution while eight voted yes. The resolution failed to pass.
Other resolutions in the meeting included the following:
• “A resolution honoring the lives of John Nathan “J.N.” Taylor and Freeman Kenneth Taylor and designating the bridge spanning Stoney Creek on Hodge Branch Road in the Stoney Creek Community of Carter County as the “J.N. Taylor and Freeman K. Taylor Memorial Bridge”
• A resolution in support of the Drug Dealer Liability Act Lawsuit
• A proposal of TDOT to construct a bridge over Gap Creek Road
These resolutions were all approved.
Later in the Budget Committee, animal control was brought back up when a motion to move remaining funds from the Sheriff’s Department back to the Animal Shelter was proposed.
Shannon Posada, director of the shelter, responded to this motion pointing out that the Sheriff’s Department had opted to continue serving in the role until Jan. 1, and with the rejection of the animal control proposal, there would be no point in moving funds at that point in time.
The motion was ultimately not carried out.
Additionally in the Budget Committee, discussions continued over the Planning Commission’s 2021 Budget. A motion to move the line item for a $2500 raise for the planning director to another line was discussed. After deliberation, a vote regarding this motion was left in a tie and did not pass. Ultimately it was decided to accept the motion as it stands with the hope of doing better on decisions next year.
Under the Rules and Bylaws Committee, it was decided that a resolution regarding school board meeting attendance pay would be formed into a resolution and voted on next month.
During Building and Grounds, Commissioner Ginger Holdren brought about two motions.
The first motion was on the renewal of the Probation Office, with a motion not to. This was ultimately passed.
The second motion involved the purchase of property. Holdren explained that during the committee’s November meeting, they had discussed four properties that may be for sale near the courthouse. This was important as the current building is at maximum capacity with multiple employees sharing an office and document storage being transferred off-site. One of those four buildings is already sold, two can still be considered after details are finalized, and one is to be sold this week.
The property up for discussion is located at 829 E. Elk Ave., and is owned by Linda Whitehead. It consists of 3.71 acres which fronts on 19E and Elk Ave. and the historical Carter house. The county had the property appraised and it came back with the house being valued at $577,000 and the vacant land at $588,000 for a total of $1.165 million.
Following the discussion, a motion was made by Commissioner Austin Jaynes to purchase the property for $1.25 million, which was less than the owner’s asking price to the county of $1.3 million, but more than the current appraisal. The motion was seconded. Discussion continued. In the end the motion failed with 12 votes against the purchase and 10 in favor.
In the Mayoral Report, Interim Mayor Patty Woodby provided updates, and concluded on the topic of COVID-19 and masking. She spoke about a local restaurant having to close their doors due to staff being sick or in quarantine with the virus. She urged the commission to help encourage others to wear masks, noting the risk of not doing so has on businesses and the community.
Along with votes and discussions came words of tribute from Commissioner Charles Von Cannon to the late Sara Sellers. He described her as one of the most giving people he ever knew, and she and her husband as two of the finest people he had ever known.
The Sequoyah Group also presented information regarding the 2020 renewal process and included an executive summary of the past 12 months in their presentation.
The meeting ended after five hours with Commissioner comments.
During these comments, Commissioner Robin McKamey shocked the Commission with her resignation.
“I just want to make it official that I am resigning,” she said. “I got true clarity tonight. I fought a really hard fight for four years, and I think it’s time that I start taking care of myself. I’ve poured my heart and soul into trying to make things better for this county and for the animals. That’s just not happening. As I sit here and reflect on the last four years, my family time, my finances, my home, which has turned in to a shelter…”
She continued.
“All I ask is for a little help, over and over…I got true clarity tonight,” she said. “I just wanted to tell everybody face-to-face, ZOOM anyways, that I will continue to love on animals and adopt what I have out, but it’s time for someone else to step up…After four years, I’m done.”

BY IVAN SANDERS STAR STAFF ivan.sanders@elizabethton.com One of the many hindrances that the pandemic of 2020 has created is a... read more