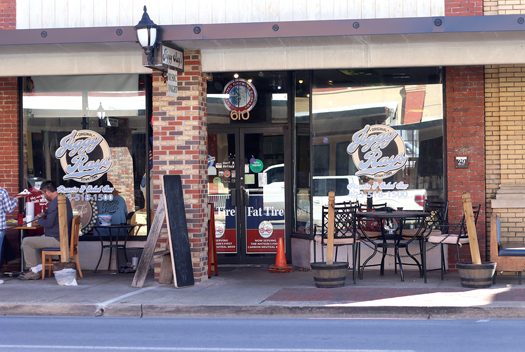 By ROZELLA HARDIN
Editorial Director
rozella.hardin@elizabethton.com
Jesus didn’t always have “church” in the synagogue. More likely than not He met people where they were. His encounter with Zachaeus came about when the tax collector climbed a sycamore tree to get a glimpse of Jesus. It worked. Jesus saw him and went home with him.
He had church with thousands of people on a mountaiside near the Sea of Galilee and fed them with a boy’s lunch of a little bit of seafood and bread.
He took time out to have an encounter with a demon-possessed man, who lived among the tombs. And, the man was never the same again.
Jesus had a knack for meeting people on their turf — and it usually wasn’t at church.
A few months ago a deacon at Oak Street Baptist Church suggested to Pastor Chris Shumate they meet unchurched people in a more relational setting to tell them about Jesus. The place — Jiggy Ray’s Pizza in downtown Elizabethton.
The deacon knew Bull Malone, one of the owners, having previously worked with him at the Elizabethton Boys and Girls Club. After several conversations and much prayer, the Oak Street congregation has partnered with Jiggy Ray’s to have church services the first and third Sundays of each month at 6 p.m. The first service will be held Dec. 6.
“We’re excited about it, and we think it will be a good way to reach people, who aren’t necessarily comfortable in a traditional church setting. It will also be a service for those who aren’t able to attend church on Sunday mornings because they work,” said Pastor Shumate.
“We will have some music, Bible teaching, and then have pizza and fellowship. Hopefully, there will be questions we can answer, and get to know people out in the community who are unchurched and have a need, and meet those needs,” the pastor explained.
“We have some young men who are members of our praise team, who already play at Jiggy Ray’s. They will be doing much of the music,” the pastor shared.
The whole concept of the ministry is to meet people where they are, to take the Gospel to the community, and to present it in a more neutral and welcoming atmosphere — especially to non-church people. “We want to be a blessing to the whole community, not just the people who attend Oak Street church,” said Pastor Shumate.
He noted that the service is open to the entire community. “We’re excited about it, and we believe God is in it,” the pastor said.
So, for some pizza spiced with some “good news” in an especially troubling time, take a break from what you are doing, and plan to attend church at Jiggy Ray’s at 6 p.m. Dec. 6.

CONTRIBUTED The Tennessee Behavior Supports Project (TBSP) at the University of Tennessee, Knoxville (funded by the Tennessee Department of Education)... read more