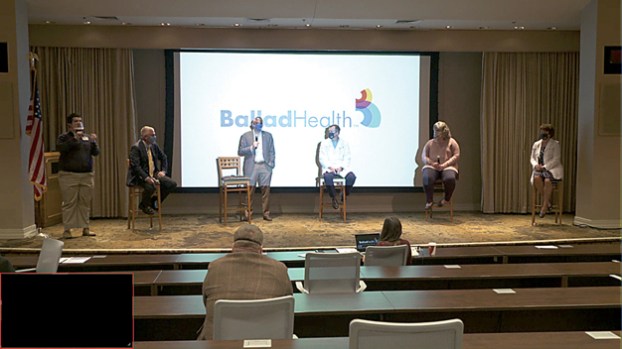 Effective Monday, Dec. 7, all elective and non-emergent procedures will be suspended from Ballad Health.
This was among the announcements and updates shared by Ballad Health Officials during their weekly media briefing on Wednesday.
Procedures will be paused for at least 30 days, at which point team members will reassess the pandemic’s spread, staffing and resource capacity.
“This decision was made in consultation with surgeons and physicians who are impacted by it, and we want to thank them for their selfless contribution to this effort,” said Dr. Clay Runnels, Chief Physician Executive. “Affected patients will be contacted by their surgeons’ offices.”
While procedures are being paused, no furloughs of staff will be taking place. Staff will be redeployed to bedside care. The National Guard is also aiding in the redeployment by replacing some clinical experts who have been doing testing.
Along with redeployment of staff to care for growing numbers, a morgue truck is now present in Johnson City. Alan Levine, CEO of Ballad, explained that this is to help with the increasing numbers of deaths. A second truck has been ordered for Kingsport.
“We don’t want our nurses to have to put patients in body bags that shouldn’t have been put in body bags” he said.
Preparations for the impending vaccine for COVID-19 are also underway.
“This vaccine is a miracle,” said Levine. “We’ve maintained the freezers to keep the vaccine on site. We are going to start with frontline workers just as the federal government is directing.”
While a vaccine is now on the horizon, officials warned it could take months to get things under control, with two doses being needed for the vaccine and time to build immunity. In addition to these steps, it remains unknown how much of the vaccine will be given out initially.
In the meantime, officials warned that more steps need to be taken to lessen the number of cases in the area, which includes a positivity rate surpassing the state and areas surrounding it. This positivity rate is at 20 percent, indicating 1 in 5 of those tested will be positive. Likewise, 1 in 6 patients admitted to the hospital are dying.
“The direction we are headed with our numbers is not sustainable,” said Eric Deaton, COO of Ballad.
Despite the new numbers presented during the briefing, this did not include Thanksgiving as it is still too early. Cases are expected to increase.
“I know the next few weeks will bring many preventable hospitalizations, many preventable deaths,” said Jamie Swift, Chief Infection Prevention Specialist.
With increased cases and deaths, officials urged viewers to change behaviors while they still can.
“We are needing everyone to step up and help us,” said Deaton. “I am pleading with you, please change your behavior if you haven’t yet.”
Among behaviors, like following guidelines, another aspect urged to change was the spreading of misinformation.
Officials warned that the spreading of misinformation, like medical experts having an agenda or the virus not being that bad or even fake, can be damaging, possibly deadly.
In addition to watching the virus and cases in the area, those who have recovered are urged to donate plasma, which can be used to treat those critically ill. Levine also announced that Ballad will collaborate with ETSU to develop a treatment, as well as study and learn the long-term effects of the virus. He said he anticipates the standing up of a site to help with these effects.
As of Wednesday, Dec. 2, there are 261 in-house patients, with 47 in the ICU and 25 on ventilators. There are four PUIs. There have been 723 COVID-19 deaths since March 1.
For the latest information from Ballad Health, go to www.balladhealth.org.

CONTRIBUTED — In conjunction with the Appalachian League, the Elizabethton Baseball Club have announced the schedule for the 2021 campaign. The Elizabethton... read more