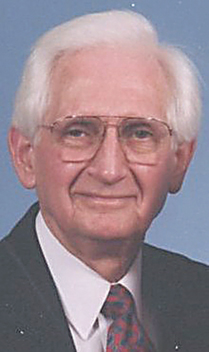 Francis Jack McAmis, 93, Elizabethton, passed away peacefully at his residence Sunday, December 6, 2020, with his family by his side.  A native of Carter County, he was a son of the late Francis & Nora Alice Williams McAmis. He was a graduate of Science Hill High School and attended East Tennessee State College. He served in the United States Navy during World War II. Jack sold auto parts his entire career, where he met no strangers. After retirement, he was a salesman at Elizabethton Auto Sales until he was the age of 90.  He was a member of Immanuel Baptist Church since 1961. In addition to his parents, he was preceded in death by his wife of 62 years Ruth Ruble McAmis, May 7, 2012, by two brothers: Charles Buford and John Howard McAmis and two sisters: Elizabeth Rhea and Mary Nell Bennett.
Survivors include his children: Tim (Judy) McAmis and Libby (Victor) Johnson. His Grandchildren: Leslie Johnson, Dana McAmis (Jacob) Smith and Matt (Alyson) Johnson. His Great Grandchildren: Emme Johnson, Lincoln Jack Johnson and Avery Wren Smith. His Brother: Jerry McAmis. Several Nieces & Nephews.
A Service to Celebrate the life of Francis Jack McAmis will be conducted at 2 p.m. Wednesday, December 9, 2020, in the Mausoleum of Peace, Happy Valley Memorial Park, with Pastor Travis Biller officiating.  Entombment will follow in the Mausoleum of peace. Friends may register their presence at the funeral home 1 to 5 p.m. on Tuesday or Wednesday morning. In lieu of flowers, memorials may be made in memory of Mr. McAmis to St. Jude Children’s Research Hospital, 262 Danny Thomas Place, Memphis, Tn. 38105. The family would like to express a special “Thank You” to All his caregivers, the staff of Amedisys Hospice, his Sunday School Class, neighbors of West C Street, Dr. Jonathan Bremer and Staff, his long time friends Michael Harold Lingerfelt, R.A. Burleson, Roger” Bullet” Ledford, and Ray & Maxine Lewis. Due to the COVID-19 pandemic, everyone is required to wear a mask and practice social distancing. Condolences may be sent to the family at our website www.memorialfcelizabethton.com. Family and friends will assemble at the Mausoleum of Peace at 1:50 p.m. Wednesday.
Memorial Funeral Chapel is serving the McAmis family.