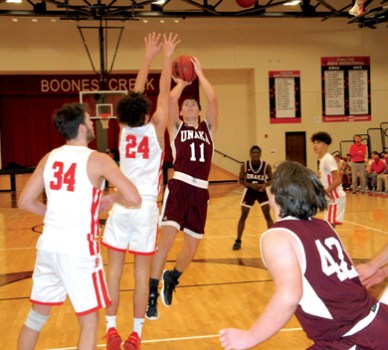 Star Photo/CY Peters Will Sexton pulls up for a jump shot over top of the Blazer defender. 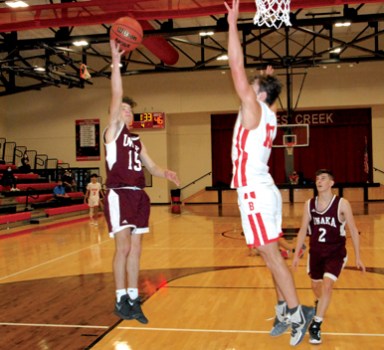 Star Photo/CY Peters Devin Ramsey puts up a one-handed jumper in the Rangers game with Boone. 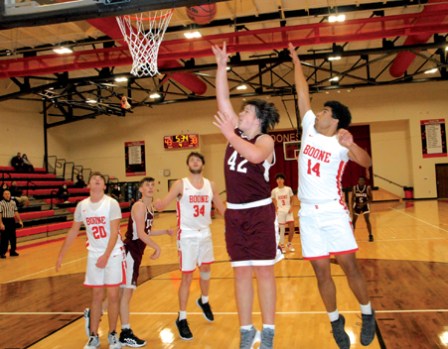 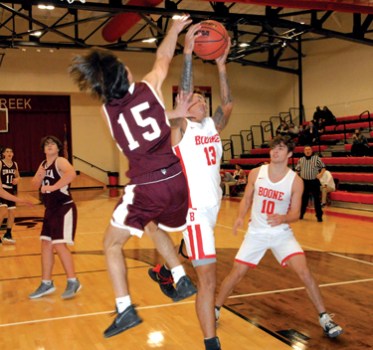 Star Photo/CY Peters Devin Ramsey attempts to block a shot by a Boone player at the rim. 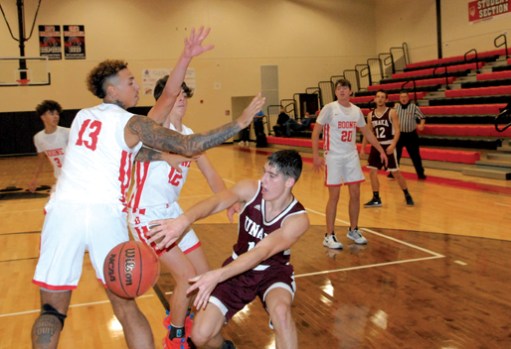 Star Photo/CY Peters Will Sexton looks to make a pass around the Boone defense.

BY CY PETERS
Even if you lead through three quarters, you must finish strong.
Unaka had Daniel Boone on the ropes until 11 seconds to go in the third
when Boone hit a three for the lead.
Will Sexton drove the floor and dished off to Landon Ramsey to tied
the score to end the third knotted at 38.
The fourth quarter belongs mostly to Boone.
The Blazers could not put the Rangers away, even pulling out to a
six-point lead with 3:54 left to play.
Unaka’s defense buckled down, and the full-court press forced turnovers,
and with 44 seconds to go, Unaka trailed by one, 49-48.
The game started on even terms with both teams trading baskets, and
by the end of one, it was 13-13.
Unaka held their biggest lead in the second by eight points, outscoring
Boone 14-6 for a 27-19 halftime lead.
A 19-point third quarter brought the Trailblazers back to life and tied the
score by the end of three.
Unaka still had a chance with the ball in their frontcourt down two with 13
seconds to go.
A back-court violation gave the ball back to Boone on the throw-in and
secured the win 52-48.
Will Sexton led all scorers with 16, Stroupe led Boone with 13.
—
Boone, 52-48