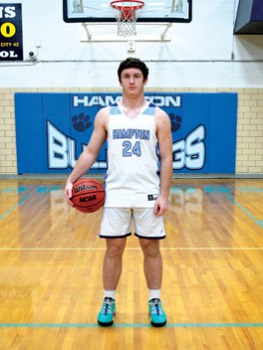 BY IVAN SANDERS
STAR SPORTS EDITOR
ivan.sanders@elizabethton.com
The Hampton Bulldogs were hoping to pull things together after their opening-game defeat to host Maryville in the Maryville Christmas Tournament.

Unfortunately, the ‘Dogs came up just short to the Class AAA William Blount Governors and Kingston to close out the tournament.

William Blount….62
Hampton…………59
The Bulldogs battled tooth and nail with the Governors before dropping a three-point decision, 62-59

It was a close game after the first 16 minutes as Hampton went to the locker room at the break trailing 31-26. Morgan Lyons and Conor Jones led the ‘Dogs in the opening half with six points each.

Logan Whitehead and Conor Burleson each chipped in with four points in the half as well. William Blount was paced by Evan Mayden and Trey Clemmer with six points apiece.

Both teams put on an offensive performance in the third period as the Govs outshot the ‘Dogs to take a 21-20 period to extend their lead to 52-46 heading into the final quarter of play.

Hampton did outscore William Blount 13-10 in the final eight minutes but it was too little too late as the ‘Dogs dropped the heartbreaker.

All 12 players on the Govs team scored at least two points.

Kingston….51
Hampton…41
In the final game of the tournament for the Bulldogs, a lack of offensive production in the third quarter that saw Kingston outscore the ‘Dogs 16-6 turned out to be the final difference in the contest.

A slow opening period saw Kingston just barely gain a 9-8 edge in the game. The ‘Dogs responded with a solid second eight minutes of play outscoring Kingston 16-13 to take a 24-22 edge to the locker room at halftime.

As mentioned previously, the ‘Dogs inability to score in the third quarter led to Kingston being able to take the win as the final period saw Kingston outscore Hampton 13-11 down the stretch to take the win.