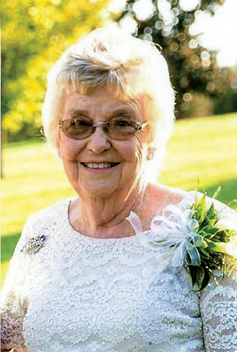 Patricia Ann Sluder Ray, 85, Elizabethton, went to be with her Lord on Saturday, January 2, 2021, at Ivy Hall Nursing Home.
A native of Carter County, she was a daughter of the late Wade C. Sluder Sr. and Laura Tolley Sluder.
Pat was a graduate of Elizabethton High School and attended Steed College. She was a retired warden secretary at the Department of Correction. Prior to that she was employed at Tri-State Containers. Pat was a member of Valley Forge Free Will Baptist Church. She had served as pianist and worked with the Childrens & Youth Choirs at Valley Forge Free Will Baptist Church and also had worked in the nursery.
In addition to her parents, she was preceded in death by a sister, Elizabeth Wolfgang, and a brother, Wade Sluder Jr.
Survivors include her husband of 64 years, Robert Lee “Bob” Ray; her children, Deborah White and husband Stephen and Bobby Ray; four grandchildren, Jacob Ray, Joshua Ray and wife Julie, Isaac Ray and wife Kayla and Laura Elijah Clevenger and husband Chris; a great-granddaughter, Adeline; a sister-in-law, Gail Sluder; and several nieces and nephews.
Funeral services will be conducted at noon Thursday, January 7, at Memorial Funeral Chapel with the Rev. Randy Johnson officiating. Music will be provided by Stephen and Deborah White, Robin Montgomery and Anette LeVeau. Interment will follow in the Mountain Home National Cemetery (New Section) at 2 p.m. Thursday. Active pallbearers, who are requested to assemble at the funeral home at 11:50 a.m. Thursday and also at 1:45 p.m. Thursday at the cemetery, will be Joshua Ray, Isaac Ray, Chris Clevenger, Randy Johnson, Carl Roberson, Sam Harrison, Billy Jenkins and Jerry Poole. Honorary pallbearers will be her church family and Hank Jenkins. The family would like to express a special “Thank You” to Judy Deloach and the staff of Ivy Hall Nursing Home, Dr. Sherrill Pack and staff, her church family for all the prayers and support during her illness, and Gail Sluder. Friends may register their presence at the funeral home from noon until 5 p.m. Wednesday or Thursday morning. Family and friends will assemble at the cemetery at 1:45 p.m. Thursday. Due to the COVID-19 pandemic, everyone is required to wear a mask and practice social distancing. Condolences may be sent to the family at our website, www.memorialfcelizabethton.com
Memorial Funeral Chapel is serving the Ray family.