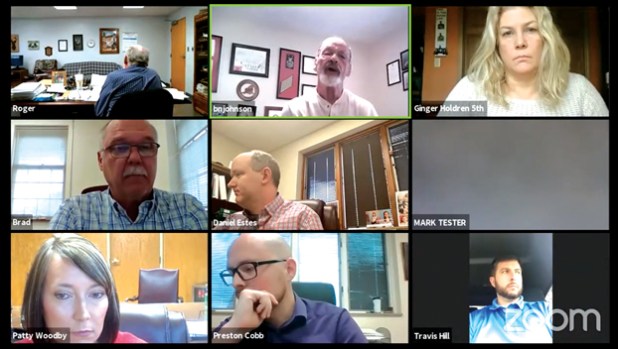 The Carter County Finance Committee met once again via Zoom on Monday with a couple of issues taking most of the discussion time for the committee for the nearly two-hour meeting.

One of the items in the new business segment focused on sales tax which was collected by the Dollar General Store located on Highway 19-E near Snap-On Tools.

That particular store falls under the City of Elizabethton but an unknown error at the state level around March of 2017 through November of 2020 which put that store in the county sales tax report.

During reconciliation of the reports from the state, the error was found and the City of Elizabethton reported that error via letter to the Tennessee Department of Revenue in February of 2020.

The total amount of sales taxes collected during that period amounted to $212,000 which was collected by the county for the state according to Cobb.

“The state has 1 year to correct (an error) from the date they are notified,” Cobb advised the committee. “The county will be short in their January 2021 sales report and we didn’t want you to be blindsided.

“The state will correct $113,675 and some change of that, but they will not be covering the remaining amount of the money owed.”

County Finance Director Brad Burke had received information in regard to the sales tax and stated, “We do owe that amount ($113,675). However, 50 percent of that remaining balance has already been sent to the schools which leave $48,951.03 that we owe to the City.”

Estes requested a copy of Burke’s figures for the City to review the calculations.

A motion was made to put the item on the agenda for the February Finance Committee meeting to give time to verify the numbers.

Burke also said that the budget committee needed to be made aware for their upcoming monthly meeting. Board Chairwoman Ginger Holdren concurred with Burke stating that the committee needs to be aware they are going to be short.

The commission voted unanimously, 6-0, to do so.

The Finance Commission had contacted a couple of surrounding animal shelters each and reviewing exactly how they operated. A spreadsheet was reviewed of the information that had been received.

One question brought forth by Holdren was what was the committee going to do as far as going forth with the issue.

“Moving forward, I think we need to determine what the next steps are,” said Holdren. “We need to know what the goals are and what the stopping point is.”

Committee member Austin Jaynes made a motion to have the animal shelter committee report back by March with further information and if they didn’t do so, then defer to the County Commissioners to make the decision.

A second wasn’t received on the motion.

Dr. Robert Acuff, a member of the Animal Shelter Board, reminded the committee that the animal shelter is a partnership with the City of Elizabethton and Carter County.

He advised of an upcoming workshop with the City Council and suggested that the Animal Shelter committee would take up the cause.

“We have a great animal shelter committee with Councilmen Michael Simerly, Kim Birchfield, and Wes Frazier. We work well together.”

Travis Hill, Committee Co-chair, also added that having the animal shelter become a 501c3 would be of benefit.

“The benefits outweigh the consequences of it not being a 501c3,” stated Hill. “They can have fundraisers and with the commitment from both the county and city, can make their budget as large as they want to make it.”

Holdren suggested the committee make a site visit to the animal shelter either as a group with social distancing and masking or individually as she stated that a lot can be learned from making a visit.

In old business, Holdren reminded the committee that the Wellness Initiative had been approved by the full commission and department heads will be receiving the information allowing them a personal touch when they share with their employees.

Each employee will also receive a flyer and a copy of the form they need to take with them to their annual physical wellness checkup and returned filled out to verify they had completed the appointment so they can be paid for the day off.

The plan is being put into place so that the county can receive favorable ratings for insurance purposes as well as to make sure their employees can be made aware of any underlying health issues that they are not aware of.