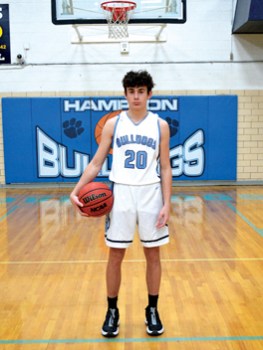 File Photo/Ivan Sanders Chance Point matched his jersey number with 20 points to lead the Hampton freshman to a 29-point win over Sullivan East.

Led by Chance Point who played string music to the tune of 20 points, the Bulldogs took an 80-51 victory.

Hampton came out of the gates hot led by big post Hayden Campbell who dropped in 10 first-quarter points to stake Hampton to a 19-14 lead at the first horn stoppage.

The ‘Dogs also got five points from Brody Hicks and four from Point to build the lead.

East had no answers for Hampton in the second period as the Bulldogs expanded their lead to 35-27 at the intermission.

Point added six points to his total in the period to help build the edge.

Hampton for all intents and purposes salted the game away coming out of the locker room as the ‘Dogs found their shooting groove to outscore the visitors 26- 14 pushing their advantage to 61-41 heading into the final quarter of play.

Hicks accounted for seven points in the huge run while Geno Carrico, Michael Anspaugh, Point, and Campbell contributed with four points each.

It was a time of mop-up duty in the fourth quarter as Hampton continued with the hot hand adding 19 points to their side of the scoreboard while holding East to 10.

Other ‘Dogs who recorded points were J.J. McElyea (3) and Grayson Young (2).

East was paced by Tyler Cross with 15 points and JP Malcolm with 13.