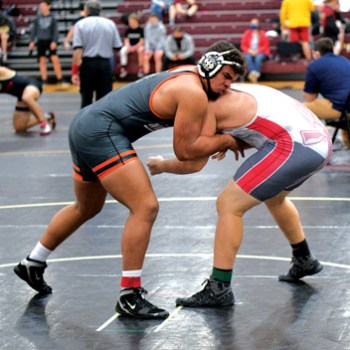 Star Photo/Ivan Sanders Cyclone wrestler Deuce Morton works to get the leverage against Heritage's Anthony Smith. Morton earned a pinfall in only 49 seconds.

Star Photo/Ivan Sanders Elizabethton's Trenton Taylor works from the top mount against Gabriel Croom of Christian Brothers. Croom, who will be one of the top heavyweights in the private school division at the state level, defeated Taylor with a fall at 3:32. 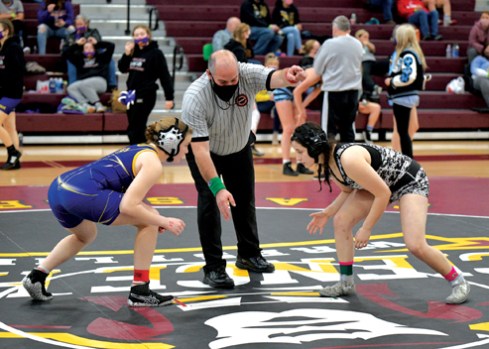 Star Photo/Ivan Sanders Sophia Perry (right) of the Cyclones prepares to take on Clarksville's Natalie Schenk. Perry won the match with a pinfall at 1:28 of the contest. 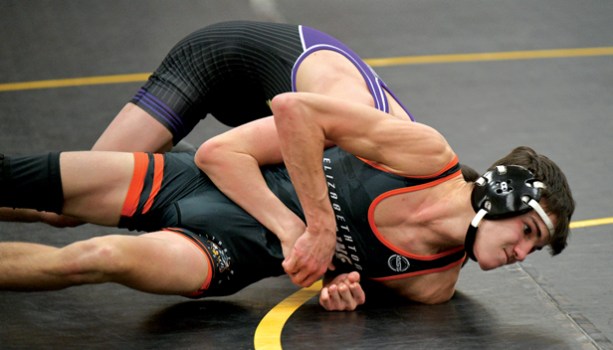 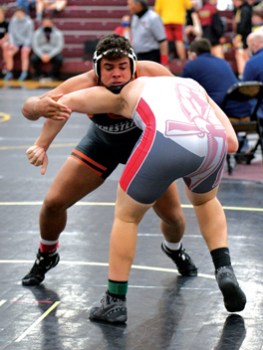 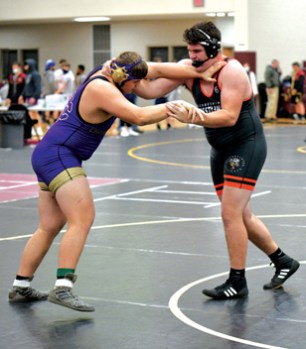 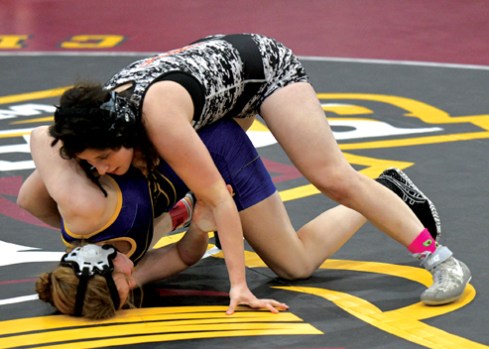 Star Photo/Ivan Sanders Sophia Perry of Elizabethton prepares to roll Natalie Schenk of Clarksville into position for a pin. 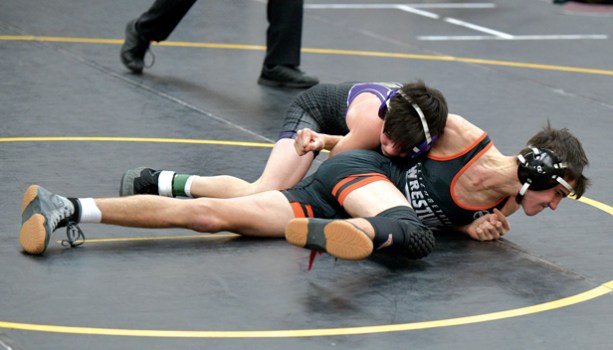 BY IVAN SANDERS
STAR SPORTS EDITOR
ivan.sanders@elizabethton.com
JOHNSON CITY – One of the largest wrestling tournaments in the Tri-Cities took place at Science Hill High School as teams gathered to participate in the Fandetti-Richardson Brawl for boys and girls with about a third of the teams that normally participate missing.

However, there were several good wrestling programs represented including the Elizabethton Cyclones.

The Cyclone wrestling team had a mixed bag of results on the day headlined by two-time state champion Deuce Morton making it to the finals in the 220-pound weight class squaring off with his opponent from the 2019 state tournament final in Pigeon Forge’s Caleb Wolfe.

Morton opened up in round one with a fall over Brett Waters of Bradley Central in only 1:43 of the match. The Elizabethton wrestler followed up by pinning Heritage’s Anthony Smith in 49 seconds.

After receiving a bye in the third round, Morton and Ryver Shelton of Jefferson County engaged in a colossal battle that had to go three overtime periods before Morton emerged with a 3-2 decision to gain the finals.

Between the grueling match to reach the finals and the hotly contested rematch that went the full three rounds, Wolfe got a measure of revenge with a 7-4 decision which is sure to be a motivational factor for Morton come regional tournament time.

“Deuce was definitely gassed and I think anybody would be,” said Cyclone head coach Eddie Morrell. “But another part of that is that our sport is highly individual and if you don’t have time to prepare, get your gas tank up, and be ready for those things and when they do hit you it’s not good.

“Normally I can lay that on an athlete but this year I have to lay that on myself. COVID took almost all our of December and normally we would have 20 to 24 matches in by the time Fandetti-Richardson comes around, but this year we had 12.

“I could not get us the competition we needed in order to be prepared for competition at that level and I squarely take the blame for that,” Morrell continued. “It is my responsibility to them to make sure they are prepared but this year with the circumstances being what they are I didn’t hit that level and that’s on me.”

Another Cyclone wrestler that had a pretty solid outing was first-year heavyweight wrestler Trenton Taylor who went 2-2 on the day to finish in seventh-place.

Taylor opened the day with an 11-7 decision over Nicholas Bryant of Heritage. Gabriel Croom, a standout heavyweight out of Christian Brothers – a private school then pinned Taylor in 3:32 of their match.

After getting a bye in round three, Taylor squared off with another state qualifier from last year in Pigeon Forge’s Mustafi Algarawi. Algarawi pinned Taylor at 3:30 of their match.

Morrell believes that with some work on techniques that his heavyweight could possibly earn placement at the state level as he went toe-to-toe with two quality state-level wrestlers.

In girls action, Sophia Perry had only four points difference from having a fourth-place finish versus the seventh that she collected.

Perry went 2-2 in the 140-pound division with a win over Clarksville Natalie Schenk with a pin in 1:28 of their contest and followed that up with a 44-second pinfall over Clarksville’s Brooklyn Whiteside.

The Lady Cyclone fell to Zennia Bouchelle of Daniel Boone in a 5-3 decision and Independence wrestler Brooklyn Long earned a 2-0 decision over Perry as well.

Morrell feels that Perry also has a lot of upside and could be in the girls’ state mix at 140 when that time rolls around.

The Cyclones will be competing in the Three Rivers Duals this coming weekend at Sullivan East High School.