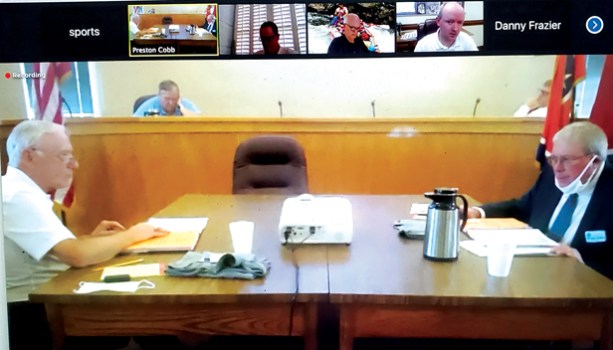 File Photo/Ivan Sanders The Elizabethton City Council will continue to meet virtually by Zoom for the 2021 regularly scheduled January meeting at 6 pm on Thursday.

BY IVAN SANDERS
STAR STAFF
ivan.sanders@elizabethton.com
The Elizabethton City Council will be conducting their regular-scheduled January meeting on Thursday evening via Zoom at 6 p.m. Interested citizens can attend the meeting by visiting the City of Elizabethton website and following the directions to connect via Zoom or listen by phone.

A pair of proclamations are on the agenda as the City Council will recognize Don Frost for his 39 years of service to the City of Elizabethton. Frost retired on December 31, 2020.

He has worked for 12 Mayors, eight City Managers, and three Purchasing Directors along with many other City employees during his time with the City of Elizabethton.

Also, the Council will be making the proclamation of January 2021 as National Mentorship Month celebrating the 19th anniversary of the program. The proclamation honors all volunteer mentors who support young people.

The local Mentorship program is a partnership between the Carter County Drug Prevention, Elizabethton Parks and Recreation, Red Legacy Recovery, and Witten Huddle.

Citizens will be allowed to address the Council by connecting via Zoom and following the directions provided during the Citizens Speak portion of the meeting.

The Council has one regular term to fill on the Planning Commission and Zoning Appeals Board during the January meeting.

In old business, the Council will be conducting a second reading and public hearings on two pieces of business.

The materials needed for the construction of the boat ramp have been verbally committed by the Ideas Group and the facility will be maintained by the Parks and Recreation Department who will be providing minor maintenance services such as the removal of trash and other debris as needed.

Council will also hear the first reading on an ordinance to amend the Elizabethton City Schools Fiscal Year 2020/21 budget for amendment #1 for the Federal Projects Fund.

A couple of change orders will be considered by Council in regard to the 2018 CDBG Water Distribution System Improvements Contract with Hayes Contractors, LLC.

Lastly, two task orders will be before the Council in regards to a 2018 Agreement with McGIll Associates.