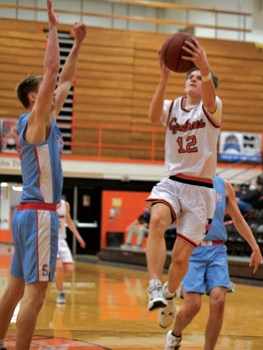 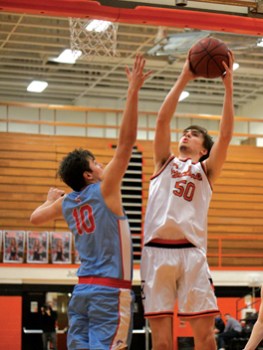 Star Photo/Ivan Sanders The Cyclones Nicholas Wilson goes high to put two points on the board for his team. 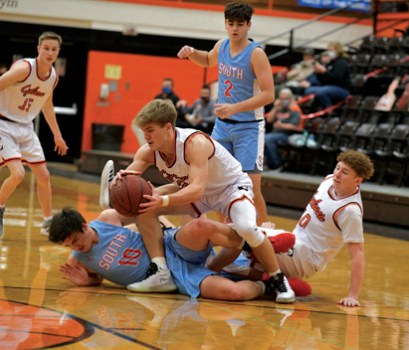 Star Photo/Ivan Sanders Elizabethton's William Willocks is undercut as players battle for the basketball at the top of the three-point arc. 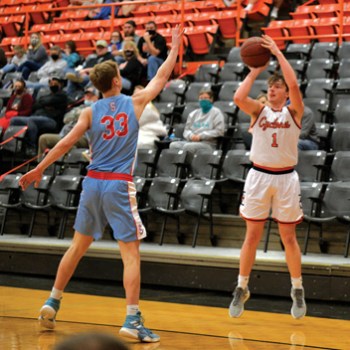 BY IVAN SANDERS
STAR SPORTS EDITOR
ivan.sanders@elizabethton.com
The Elizabethton Cyclones managed to keep their perfect Three Rivers Conference record intact through five conference games to date, but had to dig in late to hold off the South Rebels who were looking to put a dent in the Cyclones armor.

Elizabethton won over the visiting Rebels by a 53-45 score to go 11-2 overall and 5-0 in Three Rivers Conference play.

The game was tight throughout as Elizabethton managed to take a slim one-point lead after one period, 9-8.

William Willocks and Nicholas Wilson helped to put the Cyclones out front scoring four and three points respectively to establish the edge.

Elizabethton was able to gain some separation in the second quarter of play when they outscored the Rebels 15-5 to take a 24-13 lead to the locker room.

Brayden Phillips got the hot hand in the period hitting two treys for six points with Willocks adding four more points to his total.

Drew Hoover and Colton Mullins each scored five points to lead the Rebels in the first 16 minutes.

The third period was played even as both teams scored 15 points apiece to set up the final quarter of play.

South tried to make things interesting halfway through the final eight minutes as they managed to close the gap to only five points as Nick Ellage started to heat up as he scored eight points to pull his team within striking distance.

However, the Cyclones did what they have been doing all season to this point and that was turning the defense up enough to keep the Rebels at bay down the stretch.

Jake Roberts led the Cyclones in scoring with a game-high 17 points. Wilson reached double figures with 11 as did Willocks with 10.

South’s Ellage scored a team-high 11 points for the Rebels while Mullins finished with 10 points.

“I thought it was a really good effort,” said Cyclone head coach Lucas Honeycutt. “It got close here and there but every time that they would try and make a run at it, I thought we got big buckets from Nicholas Wilson.

“I thought he was on the boards, his putbacks, just his presence on the floor I thought tonight was a big thing. William started out pretty hot and then cooled down a little bit. Jake didn’t have a great first half, but came back and turned it on in the second half and Brayden had a nice second quarter there knocking down some shots.”

The Cyclones will next face Sullivan East on the road on Friday and host Cosby at Elizabethton High School on Saturday night at 8 pm.