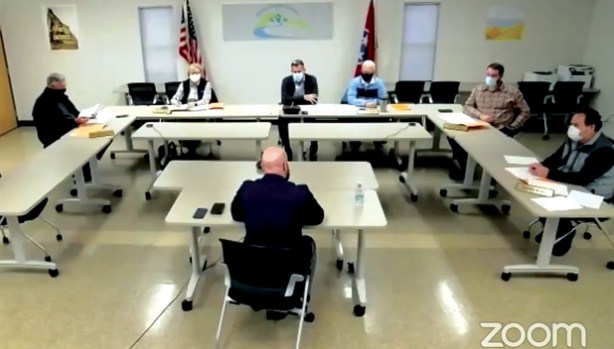 Star Photo/Ivan Sanders The Carter County Board of Education met in a workshop session to prepare for their upcoming January meeting on Thursday, January 21st at 5:30 pm.

BY IVAN SANDERS
STAR STAFF
ivan.sanders@elizabethton.com
The Carter County Board of Education met for a brief workshop leading up to next week’s regularly-scheduled January meeting on Thursday at 5:30 p.m.
That meeting can be viewed on the system’s Facebook page.
Director of Schools Dr. Tracy McAbee advised the board that schools would return to a hybrid schedule next week with students attending as they did in the first semester for hybrid attendance.
Those days will be Monday/Wednesday or Tuesday/Thursday with Friday being a virtual day for all students.
Dr. McAbee advised the board about his weekly meeting with the Health Department.
“The numbers have not changed since last week,” Dr. McAbee advised. “They felt moving forward with the hybrid schedule was a logical decision.”
The Director also replied to a statement from Board Member Kelly Crain in regards to the numbers being on a decline in Carter County.
“We talked about that,” Dr. McAbee said. “The Health Department is cautiously optimistic about that due to the number of tests declining.”
Dr. McAbee also advised the board that he would be conducting a meeting with principals, teachers, and supervisors about the Elementary and Secondary School Emergency Relief Fund (ESSER Funds 2.0).
The county is scheduled to receive quite an influx of funds from the stimulus funds and Dr. McAbee wanted to make sure that the funds are used for what the needs are in the county.
“I want to see what types of ideas that they have,” stated Dr. McAbee. “We have covered the county inviting those in Happy Valley, Unaka, Cloudland, and Hampton in all grade levels from grade school, middle school, and high schools.
“They will also come from teaching various subjects. We want to see how they feel we should allocate funding. Our plan has to be in place and submitted to the state by March 1.”
Dr. McAbee also added he had found out the county can spread the money out over a two-year period but all funds will have to be used by June 30, 2023.
Also, during the workshop, Happy Valley student Alex Caldwell approached the board in regard to the Eagle Scout Project he is currently working on at the high school.
Caldwell approached the board requesting financial help to complete the project. He had approached the board for approval of the project in 2019 with a plan to raise funds through fundraisers and donations but then COVID struck and those fundraisers went to the side.
Some area businesses have helped Caldwell get the project underway such as Transit Mix who donated the concrete pad and Johnson City Kubota provided a skidder to level the area for the pad.
Currently, $5,600 in materials is needed to complete the project. Caldwell stated any future donations would be deducted from the amount he is seeking from the Board of Education.
Included in that $5,600 estimate is $4,000 for trusses, $1,000 for a roof, and $600 for guttering. The labor is being donated so all monies would be used for material.
The Board of Education was advised during the financial portion of the workshop that the budgeting process would also be getting underway in the next couple of weeks.