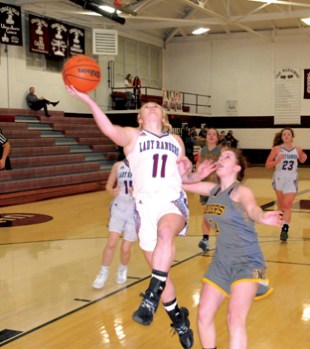 Star Photo/CY Peters Tara Whitehead of Unaka goes in for a one-handed layup against North. 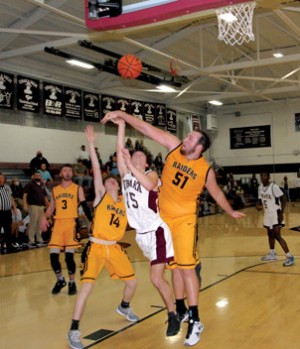 Star Photo/CY Peters Devin Ramsey of Unaka is hit on the hand as he releases a shot during action against Sullivan North. 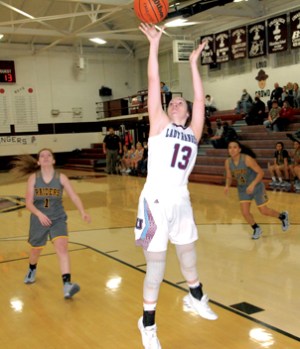 Star Photo/CY Peters A Lady Ranger goes up for a basket underneath the goal against Sullivan North.

Star Photo/CY Peters Joe-z Blamo takes the basketball among the trees as he goes in for an attempt at a Ranger bucket. 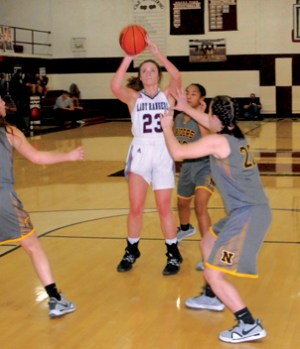 Star Photo/CY Peters Macy Ensor goes up for a shot for the Lady Rangers. 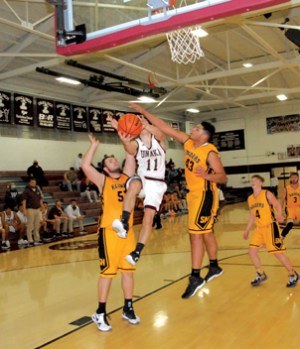 Star Photo/CY Peters Will Sexton attempts to split a strong double team as he soars toward the rim for Unaka. 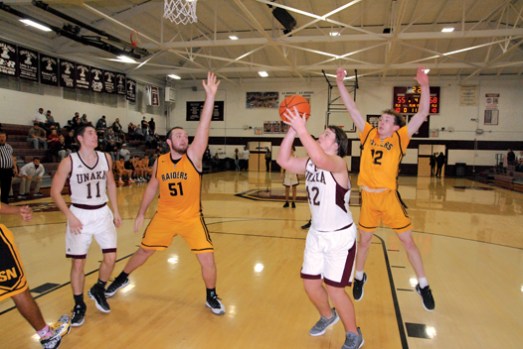 Star Photo/CY Peters Landon Ramsey goes up for a bucket while getting a double team.

BY CY PETERS
Although the Unaka gym was mostly empty on Friday night, the crowd
made enough noise that the neighbors would have thought the place was
packed.
The girl’s game was full of action, and what happened to the
Lady Rangers in Erwin the night before was not going to happen again.
The teams battled to a 13-13 tie in the first. Macy Ensor hit a three for a
13-11 lead, but as the buzzer sounded to end the first, Lilly Crawford
took the ball the length of the court for a basket, and tie the score at
13.
Unaka’s Leading scorer Lyndie Ramsey got into foul trouble and
missed most of the second quarter, allowing the Raiders to outscore
Unaka 13-7 for a 26-20 lead at the half.
In the third, North would pull out to a 36-25 lead before Ensor would
connect on one of her four threes on the night.
Turnovers plagued North in the second half as Unaka took
advantage of them.
With Ramsey returning in the third, she scored ten points and chopped
away at North’s lead.
The Lady Rangers pulled within two by the third stop, 38-36.
Unaka only scored two baskets in the fourth, both threes by Ensor,
but Ramsey would hit 10 free throws to lead the Rangers to a 53-43 win.
Unaka shot 36 free throws making 24 of them, Ramsey was 14 of 16,
while the lady Raiders went 7 of 12 as a team.
Ramsey finished with 20 points, Ensor followed with 16.
Tara Whitehead turned in a good performance scoring nine points.
Maddy Winters was the high scorer for North with 16, Crawford finished
with 10.
“Kiki Forney was hurt tonight and is a big part of our offense, said Coach
Kenneth Chambers.
“We found a way to win tonight, it’s only our second home game, and it
was a good team effort.”
In the boy’s action, North had one of the biggest teams the Rangers
had faced this season.
Like the girl’s game, the first quarter was full of action. North would
hold a one-point lead as Joesph Slagle nailed two threes to start the game
for Unaka.
The Raiders would start to pull away in the second and take a six-point
lead by the half, 23-17.
North would build a 12 point lead 38-26 midway through the third before
the Rangers would start chipping away.
Two quick baskets by Joe-z Blamo would pull the Rangers within five,
40-35.
A steal and an open pass to Slagle in the corner for a three that almost
hit the rafters cut North’s lead to two.
After a missed shot, Slagle from the same spot fired another long-range
spiral, and just like that, the Rangers took the lead 41-40.
The teams exchanged baskets, Will Sexton scored 13 of his 18
points in the second half and Slagle nailed four threes as Unaka led
49-46 with 2:57 left in the game.
Blamo also scored ten points in the second half and accounted for many
of North’s turnovers, as did Devin Ramsey.
Coach Aaron Dugger’s full-court press kept North off-balance through
most of the final minutes.
With 29 seconds left and the score tied at 55, North with the ball, the
Raiders decided to go for the final shot.
With 1.7 seconds left, North lost the ball and Unaka came up with it
calling a time-out.
Dugger drew up the final play, Sexton took the in-bound pass, dribbled twice,
and launched a half-court shot that went in, out, off the backboard, and then fell
off to the side.
In overtime. North would outscore Unaka by two for the win 60-58.
The Rangers got off two shots in the final seconds but could not get one to
fall through.
Slagle led the Rangers with 20, Sexton followed with 18, Blamo scored
12. Sullivan North was led in scoring by Isiah Pruitt with 23.
—
Girls:
Unaka 13 7 16 17 -53
North 13 13 12 5 -43