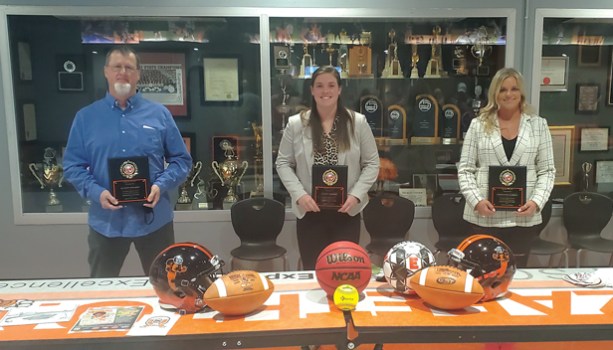 Star Photo/Ivan Sanders The EHS Sports Hall of Fame welcomed four new members on Thursday when the Class of 2020 was inducted. From left to right are Danny Wilson, Caley Hodge, and Christine Hardin. Not present was George McFarland. 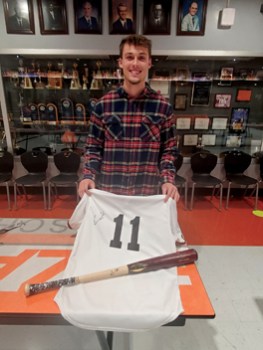 Star Photo/Ivan Sanders Former EHS baseball player Evan Carter was recognized for being named a baseball All-American. Carter was drafted by the Texas Rangers at #50 in the 2020 MLB draft. He signed a jersey and bat that will be placed in the school's trophy case.

Unlike in the past where the ceremony was held in the school’s gymnasium, this year’s class was inducted among a small group of family and friends with a limited number of past inductees present to welcome the new members into the Hall of Fame.

While past ceremonies have included the ‘Betsy Band, EHS choral department, and cheerleaders, this year’s ceremony utilized a pre-recorded rendition of the National Anthem by the EHS Mixed Ensemble under the direction of Debbie Gouge.

Hardin was the first inductee and was presented by her father, David Hardin.

“In my mind, she was the greatest all-around student-athlete that has ever walked the halls of Elizabethton High School,” said Hardin in his presentation.

In football, Hardin earned many recognitions during her time as the kicker for the Cyclone football team.

After high school where she carried a 4.0 grade-point average, Hardin earned a full athletic scholarship to Milligan University where she played four years on the soccer team.

“The one thing that I am most proud of is that you did not waste your potential – congratulations on that,” Hardin added in his presentation.

Hodge was inducted by her father, Wayne Hodge, who previously inducted his son Taylor into the HOF in 2017.

The patriarch started by saying, “That every crow thinks his is the blackest,” a saying often used by his father-in-law. “Some of you old-timers may know what that means but if you don’t then it means that I am a proud dad.”

After a successful career at EHS playing softball, Hodge went to Emory and Henry where she graduated with a 3.8-grade point average. As a member of the Wasp, Hodge’s accomplishments were numerous including the bench press and squat record that she set as a freshman.

Hodge currently holds the home run record with 32 homers at Emory and Henry. She is now a member of the United States Army after enlisting in 2018 after graduation from college.

The third member inducted was McFarland by his former track coach at EHS, Jim Presnell. McFarland has been on the list to be inducted several times before but couldn’t make it and this night was the same but Presnell wanted to go ahead and make sure that McFarland was placed in the HOF.

“George was one of the smoothest hurdlers that I have ever seen,” said Presnell. “As a senior, he ran in 15 meets and won all 15.

“He qualified for state and my wife was pregnant and due at any time and she told me if I went to state with him that I could just stay there. Coach Tommy Jenkins went with George and I waited and waited for the call and finally, they called and told me he had won the state title.”

The fourth and final member was Wilson who was presented by his brother Michael.

Danny has become a renowned artist doing work for many high-profile clients worldwide after graduating from EHS and the University of Tennessee.

“I could tell he was going to be an artist at a young age when we collected baseball cards and if he didn’t like the player’s hairstyle, he would take his magic marker and give them a beard and mustache and sideburns,” said Wilson drawing laughter from those in attendance.

“Reggie Jackson and Johnny Bench cards that could have been worth hundreds of dollars today but now he ruined them and I still don’t understand why he did that.”

To close out the night, EHS baseball head coach Ryan Presnell recognized Evan Carter for his selection as an All-American, the first in the history of the school from what Presnell has been able to find.

Carter is now a member of the Texas Rangers after being drafted #50 in the 2020 MLB draft.