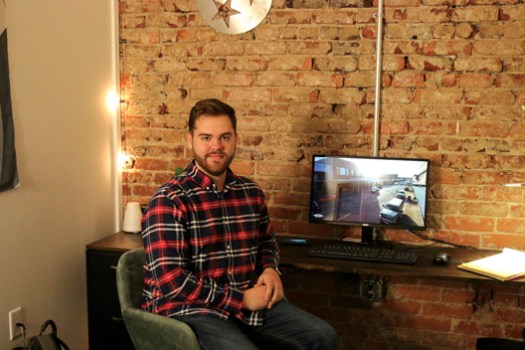 Star Photo/Ty Butler Seth Hice sits at a computer while monitoring the new webcam installed at the Elizabethton/Carter County Chamber of Commerce. 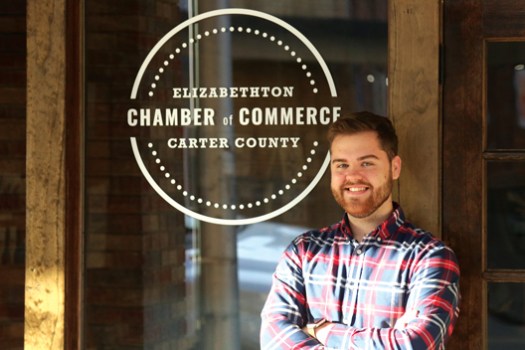 Star Photo/Ty Butler Seth Hice, Media Coordinator of the Elizabethton/Carter County Chamber of Commerce, spearheaded the installation of the webcam at the new Chamber office downtown.

BY TY BUTLER
STAR CORRESPONDENT
Surrounding residents of Elizabethton no longer have to phone a friend and ask what the weather is like in downtown Carter County. Thanks to the new addition of a live webcam, individuals can now visit Elizabethton’s Chamber of Commerce website and get an accurate visual of the atmospheric conditions.
The camera was placed above the Commerce’s brand new building right before Christmas after employees noticed that they were getting many calls regarding a lack of downtown photos and videos.
It did not take long for Seth Hice, the Media Coordinator at Carter County’s Chamber of Commerce, to come up with a plan to assist these exact individuals.
“We had some people that called and asked why a picture of a building at the airport is the only thing we see when watching the news, whereas other towns have photos from downtown? So, when we moved to our new location in the middle of the city, it allowed us to get a camera mounted and show off our area,” said Hice.
The new addition is not only a great way to display weather and traffic, but Hice also sees it as a keen opportunity to advertise and market the area.
“It’s fun, but it’s also a good marketing tool. When we’re having events downtown, this is a great way to show what’s going on. We’re able to keep an image of Elizabethton in people’s minds in a very real way,” Hice said.
There is little doubt that the advancement of technology has allowed for many businesses to broaden their reach and provide new resources for their customers and community — Elizabethton’s Chamber of Commerce is no different, as the webcam implementation not only increases website traffic but also serves a purpose.
And while the brand new incorporation already possesses many utilities, Hice states that he may add another dimension in the future.
“We’re not doing it yet, but we may open it up for sponsorships as an advertising opportunity. Right now, we’re not entirely sure and we haven’t marketed it yet,” Hice said.
If the network decides to go through with the plan, neighboring businesses would be able to benefit from the high volume of viewership to gain exposure — and thanks to the new phone feature, individuals can now access the webcam while on the bus or during shopping, away from their home computers, multiplying the traffic views.
And though the plan has yet to iron out, people from all areas can now check in on downtown Elizabethton, at all hours of the day and night — something that was not possible before Hice’s plan to do what had not been done before.
“I really like how it keeps an image in someone’s mind and shows the change of downtown. The webcam shows that stuff is happening here and that there are hustle and bustle in Elizabethton. That alone creates interests,” Hice said.
To check out the webcam view, individuals can visit www.elizabethtonchamber.com and click on the ‘webcam’ tab on the right side of the site.