Return to school large topic of discussion for CCBOE 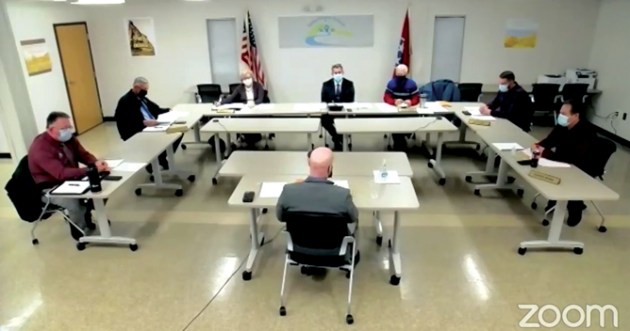 Star Photo/Ivan Sanders The Carter County Board of Education met in their regularly scheduled meeting for January via Zoom.

BY IVAN SANDERS
STAR STAFF
ivan.sanders@elizabethton.com
The Carter County Board of Education met in their regularly scheduled January meeting on Thursday and although the meeting was relatively short, there was some important information shared including clarification on when students could return to school on a full four-day schedule.

To kick the meeting off, Carter County resident Louie Greene shared with the board about a special presentation he had to offer the school board.

Greene spoke about how his parents had both worked eight-hour shifts at North American Rayon and then returned to their farm to work eight more hours in their fields.

They left the property to Greene and he said he felt like his parents would be happy if he were to present the property and the equipment on the property to the Carter County Schools as a means of teaching kids about tree husbandry and many other subjects that the land could be used for.

The property is off of Gap Creek Road and Greene said he felt the property could be used for years to come by the County School system. He stated that to the best of his calculations that the land and the equipment would come in around $450 to $500,000.

Mr. Chris Hitechew was welcomed as the new board member from District 2.

During the Director of Schools time for sharing, Dr. Tracy McAbee shared there had been some confusion created by social media in regards to Teacher of the Year awards.

Dr. McAbee also advised the BOE that he had received some hard numbers on the ESSER funds for the school system which come in around six million dollars.

He said that talks are still ongoing on how to utilize the money. Dr. McAbee also advised that it probably is a good idea to remain in a holding pattern of using federal money for summer school until the state decides if they are going to front the funds.

A question was brought up by board member Danny Ward of was the school board going to stick to the percentage rate of positivity rate at 15 percent or below before returning full time.

“Dr. Thomas from the Health Department meets with Mr. VanHuss and myself each Thursday and said that the numbers are looking good and they don’t know why especially since when you don’t have a lot of testing,” said Dr. McAbee.

“The testing positivity rate is coming down and things are looking better than what they were. I still think we need to stay hybrid through January and look at bringing the students back in February, especially the younger learners.”

After some discussion around what the acceptable percentage should be, the board voted unanimously that if in the health department’s opinion it would be okay to bring the students back if the numbers continue to trend in the right direction then Dr. McAbee could follow through with bringing them back to a four-day schedule in February of Monday through Thursday with Friday remaining a virtual day to allow for thorough cleaning.