A Life Lived: Mary Blevins’s life not defined by things, but by character 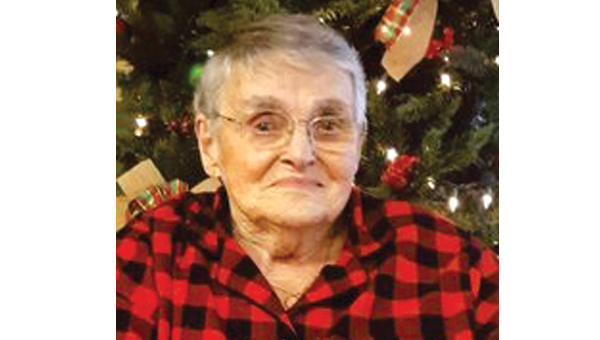 Mary Georgia Hill Blevins died Dec. 31 at the age of 86. She had spent almost the last three years of her life living at the Waters of Roan Highlands Nursing Home.
Mary was a lifelong resident of the Hampton-Roan Mountain communities, and when she was much younger rode Tweetsie to school. She grew up in a hollow in the Gorge — an only child of Walter and Jane Whitehead Hill. She was 16 years old when her mother died.
Mary’s daughter, Becky, said her mother attended school at Hopson. “Much of the time she walked to school, but often Mom’s mother would buy her a book of tickets and when she did, she could ride the train to school,” she shared.
Becky said her mother had a hard life, which in some ways defined her. “She was very simple and plain spoken. She said what she meant and meant what she said. But, she was a very giving person, and would give you her last bite and her last piece of clothing. Mom was one tough person, and was always a fighter. Quitting was never an option with her,” Becky shared.
Mary was a homemaker. She raised a garden and canned many of the vegetables she grew. Becky also shared that her mother was a good cook. “Her vegetable soup was so good and her cornbread was out of this world. I always came back for seconds,” she said.
Mary took care of her father, who was a hard worker as well. “He worked on the road, and during the winter he would break the icicles off the cliffs, making sure it was safe for the train to pass through the gorge,” Becky shared.
“Mom was a very kind person and enjoyed things most other women did. She liked painting her nails, wearing lipstick, and she liked earrings. She always wanted her clothes to match,” said Becky.
Aside from cooking, Mary enjoyed sewing, especially making quilts. She had both a treadle and an electric sewing machine. “She also did some sewing by hand,” Becky shared.
“She didn’t have many modern things. She had a wringer washing machine and did her cooking on a wood stove. And when my brother, Randy, and I were growing up, we may not have had a lot of what other kids did, but we had what counted. I know I miss her,” said Becky.
Miss Mary, as she was known at the nursing home, enjoyed worship services at the home. She also enjoyed the crafts, coloring, and playing Bingo. She especially enjoyed watching the birds outside her window and feeding them.
“Mom was a good Christian woman and enjoyed going to church. She attended church until her health no longer allowed her to do so,” Becky shared.
“Mom’s life was pretty simple and plain. She never traveled anywhere. The farthest from home she ever traveled was across the state line to North Carolina. I remember her going to the Bonnie Kate Theater some. When time would allow, she enjoyed watching soap operas on television,” said Becky.
Mary was married to Luther Blevins, who died in 2014. “My dad worked at the local rayon plants and Summers-Taylor,” Becky said.
In summing up her mother’s life, Becky said: “It was not things that defined her, but it was her character, her honesty, hard work, and the love that she had for me and Randy and her family and others. That’s who my mother was.”
She added: “And, today she is in paradise.”