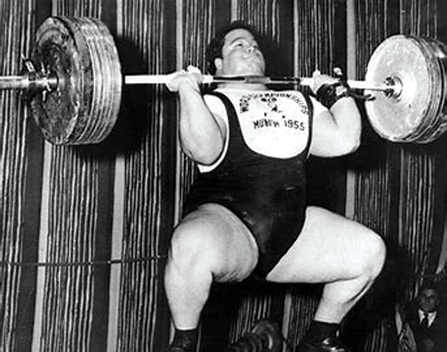 BY ALEX CAMPBELL
Paul determined that he would never allow anyone to make him feel helpless again, so he decided that day he would build his body stronger no matter what anyone said.
He took to lifting odd implements in the back yard for hours. His parents embraced each other by the window as they watched him in his seemingly futile attempt to build his body.
They discouraged him each time reminding him of the dire warning of the experts about his frail health. But every time they made him stop, they would find him the next day in the back yard at it again.
After a time, Paul eventually saw small changes in his body. As his muscles and strength grew, so did his confidence and dreams.
He had one goal as he grew into a teen and that was to be strong enough to play football for his beloved Tocoa High School.
He eventually won over his father who helped him make his first weights, poured from concrete into a wooden frame. That year, he earned a position as first-team blocking back eventually earning a scholarship to Furman University to play football.
Paul was not destined to play football long.
At this time, the sport really didn’t know what to do with a man of his size who was still athletic. Remember that the NFL was still fining players for weighing over 300 pounds in the 1970s.
The “experts” just felt that a man of his size could not be athletic enough to play in the offensive backfield as he had in high school.
His coaches determined he would have to move to the line, but they still insisted on a diet and starved him as close as 200 pounds as they could get. When he returned home during his break from school, his mother was appalled.
This led to him living with his parents in Elizabethton, attending a carnival, and his fateful meeting with Bob Peoples.
Once he began to focus solely on weight training, his career quickly took off.
By June of 1955, at twenty-two years of age, Paul Anderson won the USA National Amateur Athletic Union Weightlifting Championship which allowed him to travel to Moscow where he captured the world’s attention during an amateur weightlifting contest.
He not only broke the world record but embarrassed the Russians on their home turf during the height of the Cold War.
From Russia, he traveled to many Middle Eastern countries serving as a goodwill ambassador for the United States.
In the fall of that same year, Paul added to his fame by winning first place in the World Championship in Munich, Germany, where he surpassed two more world records.
A year later, he gained further acclaim as the gold medalist in weightlifting at the Olympic games in Melbourne, Australia. To date, he is the last American super heavyweight to win first place at the Olympics.
Paul Anderson is still considered by many to be the strongest man to ever live. For evidence, many point to his 6,270 pounds back lift completed in 1957.
It is still the greatest weight ever lifted by a human.
He was summoned to the White House to meet Vice President Richard Nixon who thanked him for his efforts as an unofficial ambassador for the nation.
He was popular on many of the television talk and variety shows like The Ed Sullivan Show and the Tonight Show.
It seemed that at such a young age, Paul had conquered the world of strength.
He, through dogged determination, had transformed himself from that sickly little child, unable to protect his two little pencils, into the strongest man the world had ever seen.
But there was still this nagging thought that lingered in the back of his mind.
What about that schoolyard bully that made Paul’s young life one of misery?
There was still some unfinished business to attend to. Paul made up his mind that he would return to his hometown of Tocoa, GA because he had a score to settle.
Paul had naturally come to detest bullies, and now he dreamed of his vengeance. As a matter of fact, he had been planning it for years.
Now that he was a hulking man with no physical equal, nothing would stop him from exacting his revenge on his childhood nemesis.
To be continued…