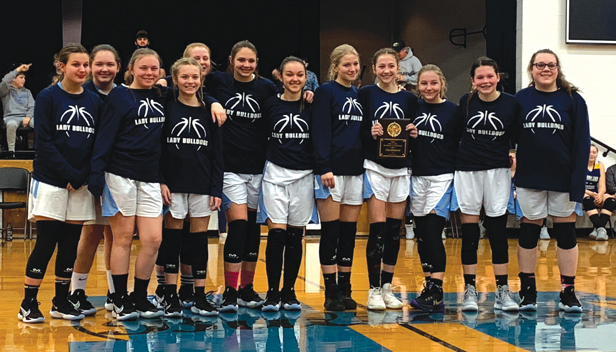 Photo Contributed The Hampton Jr. Lady Bulldogs captured the Class A Area 1 Girl's Basketball Championship on Thursday with a win over neighboring Cloudland. Both teams advance to the sectionals which begin on Monday.

HAMPTON – Some things never change like a cold glass of lemonade on a hot summer day, the spray kicking off a bass boat skipping across Watauga Lake, and girls basketball rivalries in Carter County.
The latter played out again on Thursday evening at Hampton Middle School when the Cloudland Middle Jr. Lady Highlanders and Hampton Middle Jr. Lady Bulldogs took to the court to settle who the champion would be in the Class 1A Area Girls Basketball Tournament.
When the dust settled at the end of 24 minutes of action, it was the Jr. Lady ‘Dogs who had secured the title and the No. 1 seed for Area 1 heading into next week’s sectional with a 28-19 win over Cloudland.
Hampton wasn’t taking any chances in the contest as the Jr. Lady ‘Dogs seized a 20-6 advantage at the break and fought to maintain an edge throughout the contest.
Piper Helle scored all of her eight points in the first half of the contest to help Hampton set the tone for the contest. Ella Eastep dumped in four points while Brea Hicks added a trey. Abbie Lunsford also totaled three points with Faye Carrico adding two in the opening half.
Shevon Hamby led the Jr. Lady ‘Landers in the half with five points with one point scored by Regan Blair.
Cloudland made a large push in the third quarter as the Jr. Lady ‘Landers went on a 12-2 run to cut deeply into the Hampton advantage making it a 22-18 contest heading into the final quarter of regulation play.
Laiken Blair led the charge for Cloudland with five points in the quarter. Blair also added three points with Makenzie Street and Isabella Jarrett contributing with two points each.
Hicks had the only two points of the quarter for Hampton.
With only six minutes left in regulation, the Jr. Lady ‘Dogs settled down after a lackluster offensive effort in the third quarter to outscore Cloudland 6-1 down the stretch to take the nine-point victory.
Hicks connected on a trey, Hannah Smith added a deuce, and Carrico dropped 1-of-2 from the charity stripe for Hampton. Blair added a free throw for Cloudland.
By virtue of reaching the championship contest, both teams qualified for the sectional as Cloudland will be the No. 2 seed from Area 1 behind Hampton.