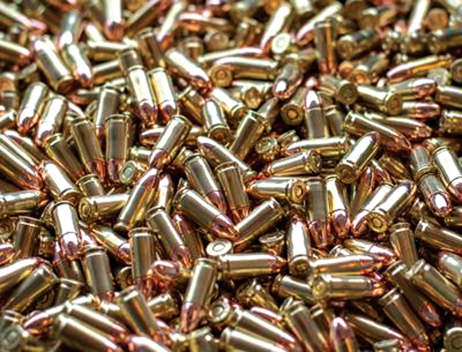 Photo Contributed Ammunition is in short supply at most stores because of panic buying and the popularity of shooting. It may not get back to normal until mid-2022.

Most of the outdoorsmen and women in East Tennessee enjoy shooting and hunting. Guns are a part of our heritage, and most of us grew up being taught how to safely use firearms and the joy of shooting.
During the last year, however, there has been a troubling trend across our country. There is suddenly a shortage of ammunition.
Have you been to any store lately that sells guns and ammo?
The store may have a few guns, but ammunition is as hard to find as an honest man in politics. Shelves that once were heavy with every caliber of ammunition at reasonable prices have become barren.
Guns sit idle in their gun cabinets because there are no shells to use in them. Even hunters had trouble finding ammunition to deer hunt last fall because the shells were not there to find.
Why has this suddenly happened?
This ammo shortage really did not begin in 2020.  About 12 years ago, I owned a sporting goods store and sold ammunition when this problem began.
Suddenly ammunition started flying off shelves because of hoarding and political upheaval. This left most retail businesses scrambling to find any to replace it.
When they did find some ammunition to replace what they had sold, they discovered the prices had doubled or even tripled for popular brands and calibers.
The worst of these was the very common 22 L.R. ammunition. 12 years ago, I was selling 22 L.R. shells for .99 to $2.99 a box.
Overnight people started hoarding the shells, and the price jumped to $5.99 a box. People gladly paid me this per box because they were just glad to get it.
I kept ammunition in my business in a variety of ways. I was lucky enough that when I ran out of certain calibers, I found a way to buy them back. That has not happened today.
I recently looked on Gunbroker.com, a very popular auction site for guns and ammo, just to see how expensive ammunition had become. Those same 22 L.R. shells I once sold for $6.00 a box are selling for $12 – $15 a box.
Other ammunition has doubled and tripled in price.
Then I went to online stores, such as Bass Pro Shop and Cabela’s, to see how expensive they were selling their ammunition. They did not have any.
These are major retail stores with all of the buying power of a major distributor, and they only had a few types of ammunition that are not very popular.
I could not believe it.
But why has this happened? It has been a perfect storm for ammunition retailers during 2020, and several things contributed to this shortage.
First, Covid-19 made some ammunition manufacturers use fewer employees, and they could not keep up with demand.
Next, there was a rise in the popularity of guns and hunting. More people than ever were buying guns, and they were using a lot of ammunition.
Finally, the biggest reason the ammunition disappeared was that people were not trusting the future, and they were buying it to hoard.
They were troubled about the riots and political problems in our country, and they saw a gun and ammunition as a way to make themselves feel better about the future.
They were and are going to protect their homes, families, and communities.
Manufacturers say it will take all of 2021 and part of 2022 to produce enough ammunition to get back to pre Covid-19 levels.
In the meantime, there is nothing we can do except watch and wait.
Soon our country will get used to the new president, people will stop being so paranoid and the world will go back to normal. Personally, I can hardly wait.
Have a safe week and God bless.