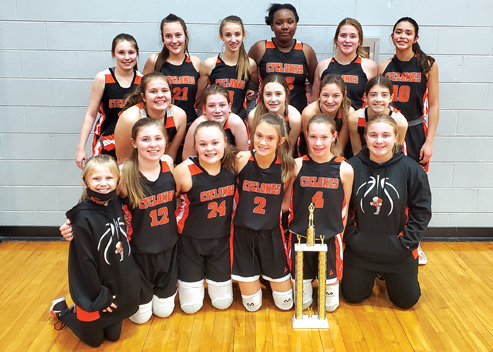 KINGSPORT – The old saying is that close only counts in horseshoes and hand grenades but on Thursday evening in Kingsport, the T.A. Dugger Jr. High Lady Cyclones were right on the cusp of defeating a team that they had lost to in two previous meetings in the championship game of the 2020-21 Area 1 Class AAA Middle School Girls Tournament.
Liberty Bell carried the championship trophy back to Johnson City but not before the ladies of the T.A. Dugger gave them every last ounce of battle they had falling 38-36 in overtime.
The Jr. Lady Cyclones shot out of the gate like a missile surprising and outscoring Liberty Bell 20-7 in the opening six minutes of play.
Michelle Shields couldn’t miss scoring nine points in the opening quarter while Aubrey Cole tickled the cotton for back-to-back treys that left the Liberty Bell bench shaking their head at the explosive output.
Andrea Flores had five points as well but also was saddled with three quick fouls which kept her sidelined until the second half of action.
Kayley Oliver knocked down five points for the Lady Patriots.
Unlike the first quarter, the Jr. Lady Cyclones were suddenly brought back to reality like a cold splash of water in the second quarter as Liberty Bell managed to chisel away at the 13-point lead thanks to a four-point quarter by TAD while the Lady Patriots totaled seven to make it a 24-14 advantage for the Jr. Lady Cyclones.
Oliver once again scored five in the stanza for Liberty Bell to give her 10 at the halfway mark.
Shields logged two points in the quarter to give her 11 by the break. Peyton McGee converted 2-of-3 free throws to account for the only other points in the quarter.
Liberty Bell made adjustments at the half that helped to turn the game back around heading into the final six minutes as the Lady Patriots turned a furious defensive effort into 10 points in the third while holding TAD to only four points making the score 28-24 heading into the final period of regulation.
Amaya Redd and Kinley Painter turned things around for Liberty Bell by scoring four points each in the stanza. Flores and Kayelyn Nave accounted for the points in the quarter as each nailed a deuce.
With the championship in the balance, the Jr. Lady Cyclones continued to find no offensive success in the fourth quarter once again scoring only six points while Liberty Bell continued to fire away scoring 10 to force overtime knotted at 34-34.
In the three-minute overtime session, Liberty Bell managed to pull out to a four-point lead before a Shields bucket pulled the ladies from ‘Betsy with two points with time winding down.
Jr. Cyclone head coach Matt Fox called a time out with under 10 seconds to play to set up a play. With the clock ticking, Flores attempt from just outside the three-point arc in the left corner caught the edge of the rim and bounced off giving Liberty Bell the 38-36 victory.
“Liberty Bell adjusted a little bit at halftime and they put a little bit more pressure on us,” said Fox after the contest. “We look at our team and we have three seventh-graders starting so it comes with age.
“I told the girls it was on me – coaches lose them and players win them. I am proud of them – they played hard. The good thing is that we still have sectionals and going into Saturday and if they come out with the same hunger and a little bit more grit we can still come back and give Liberty Bell another run for their money.”
The Jr. Lady Cyclones will play Sevier County Middle at 1:30 pm in the first game of the sectionals at John Sevier in Kingsport. 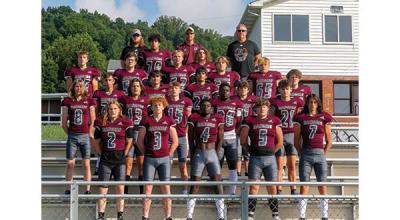 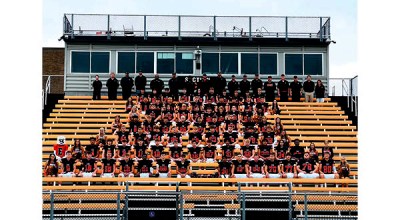