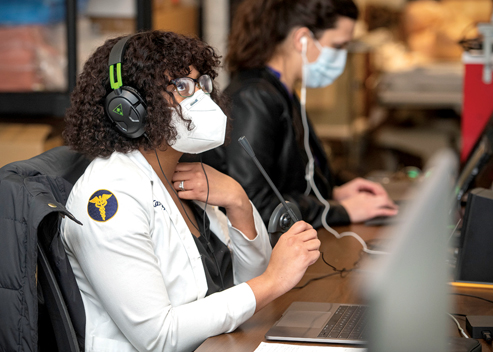 JOHNSON CITY — The main project in one of Kamyl Harvey-Bogan’s classes at East Tennessee State University’s Quillen College of Medicine transformed into an opportunity for the fourth-year medical student to raise awareness about racial disparities in health care and bring attention to ways in which future physicians can overcome them.
Last summer, Harvey-Bogan took an elective course that taught the students how to build medical simulation cases for medical education. The students’ final assignment was to develop their own case by creating a patient, determining the patient’s background (including medical and social history), identifying the patient’s chief complaint, and determining how that complaint is presenting and how it can be treated. Then, the students used either high-fidelity manikins or simulated patients (actors who play the role of patient) to run a pilot of their case.
“I decided I wanted to include African Americans in my case because there is a very low percentage of African Americans in this area, so I felt that some of the pathology more specific to that group might not be visible to my counterparts,” said Harvey-Bogan, who is from Memphis. “As future physicians go into urban areas and more diverse areas of the country, they might not have all of the tools in the toolbox that they need.”
Harvey-Bogan decided to focus her case on sickle cell disease (SCD), a genetic condition that is prevalent among African Americans. One in 365 African Americans has SCD, and one in 13 African Americans has the trait.
According to the Centers for Disease Control and Prevention, SCD is a group of inherited red blood cell disorders. In someone who has SCD, the red blood cells become hard and sticky and look like a C-shaped farm tool called a “sickle.” The sickle cells die early, which causes a constant shortage of red blood cells. Also, when they travel through small blood vessels, they get stuck and clog the blood flow.
SCD can cause extreme pain, organ damage, strokes and infections.
“I had two friends with this condition, and one passed away from it in high school,” Harvey-Bogan said. “It’s a serious disease and it’s important to do a full head-to-toe exam to better understand what these patients are experiencing.”
Working with her instructors, Dr. Caroline Abercrombie and Dr. Patricia Amadio, as well as Andrew Berry, the manager of the Center for Experiential Learning, Harvey-Bogan developed her case to shed light on SCD’s treatment, epidemiology and ethical considerations. Harvey-Bogan’s professors were so impressed with the case that Amadio asked her to present to Quillen’s second-year medical students in the “Doctoring 2” course.
As part of the case, she was the voice of the simulation manikin, speaking as if she were the patient, describing the pain and emotional toll a SCD patient can experience. The medical students ran through the case interacting with the manikin, providing fluids, oxygen, morphine, emotional support, and the care that was needed.
“Utilizing the high-fidelity manikin, I tried to humanize the situation and put a voice to the pain because so often we see numbers, we see statistics, but we don’t have someone to associate it with — not just with our clinical understanding, but our human understanding — in order to have compassion,” she said.
Then, Harvey-Bogan led the students in a debriefing session where they discussed the pathophysiologic, clinical and ethical considerations of the case. Harvey-Bogan also pointed out the gaps in clinical guidelines and research addressing SCD and raised issues related to treating the pain these patients might experience.
“These patients can experience a profound sense of pain that is unimaginable, and they need to be treated not as those who are seeking a ‘medicinal opportunity,’ but with respect, as those who really need pain medication,” she said. “We need to make sure we leave our biases at the door and not become jaded physicians who treat everyone as drug-seekers. We need to look at every patient as an individual and make sure we respect their specific situation.”
“In this part of the state, there is a very small population of people of color in general,” said Amadio. “As far as the students’ clinical experiences, they’re going to be skewed in a way that they might not see (SCD) as much as they would in a different city or different area of the country. So that’s a big gap in their clinical exposure.”
Amadio appreciated that Harvey-Bogan’s case not only taught the science, but also illuminated disparity and biases that come into play when diagnosing and treating conditions such as SCD. She plans to ask Harvey-Bogan to present to future classes to continue these important conversations.
“The events of the preceding year have reminded us that to be anti-racist is everybody’s job,” Amadio said. “At Quillen College of Medicine, we feel strongly that we need to assess the extent to which bias can be part of curriculum — sometimes even a bias created by omission — and in whatever forms we identify it, we need to be proactive and intentional in addressing it.”
To learn more about Quillen College of Medicine, visit www.etsu.edu/com.