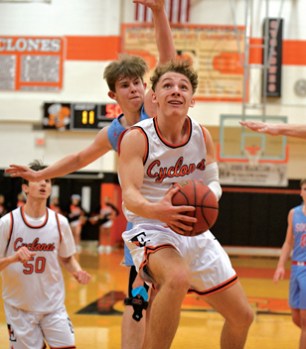 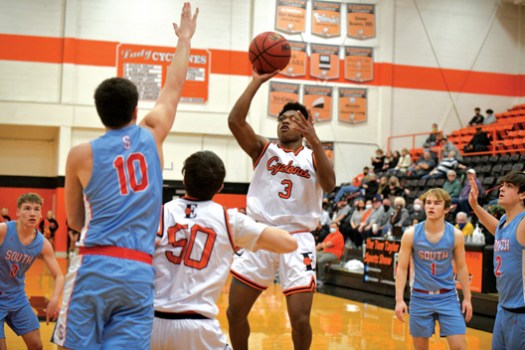 Star Photo/Ivan Sanders Elizabethton's Nate Stephens pulls up for a one-handed jumper against the Rebel defense. 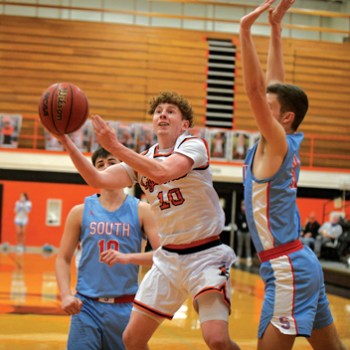 Star Photo/Ivan Sanders Seth Carter goes up for a bucket against the South defense. 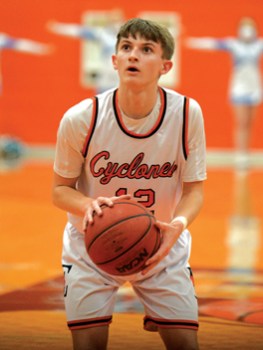 Star Photo/Ivan Sanders Bryce VanHuss of the Cyclones eyes the rim on a free throw attempt. 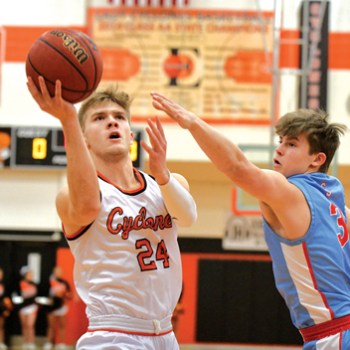 BY IVAN SANDERS
STAR SPORTS EDITOR
ivan.sanders@elizabethton.com ﻿﻿
One might have thought four quarters would have been enough to settle the District 1-AA Boy’s Semifinal contest between Elizabethton and Sullivan South, but anytime these two teams get together lately one never knows.

Such was the case on Saturday night as the teams were tied after 32 minutes, after 36 minutes, and finally settled the contest in the second overtime period as Elizabethton advanced to Tuesday night’s District 1-AA final at East with a 72-63 win over the group of pesky Rebels.

The game was a tussle from the first whistle until the final horn ended the game as South was hoping to pull an upset on the two-seeded Cyclones on their home floor but the Cyclones had other plans – they just had to fight extra hard to achieve.

South had the upper hand at the first horn taking an 11-9 lead led by three points each from Nick Ellage, Colton Mullins, and Will Harris.

Coach Lucas Honeycutt’s team responded in the second period by forging ahead 20-16. Nicholas Wilson and Jake Roberts had a hand in the quarter as Wilson used his size inside to muscle for six points while Roberts added five.

Coming out of the break, it was a battle from the get-go as both teams totaled 14 points each in the third period.

Jackson Dean buried two deep treys for South while William Willocks and Roberts knocked down five points each for the Cyclones as Elizabethton took the four-point edge, 34-30, into the final eight minutes of regulation.

The Cyclones had a five-point lead with 40 seconds left to play but the Rebels weren’t ready to fold their tents as they forced two Cyclone turnovers that resulted in a trey from Ellage and a deuce by Cooper Johnson to force the first overtime tied at 43-all.

South looked poised to take the win in the first overtime up by three points with under 15 seconds left when Roberts went up for a game-tying three. Roberts missed but was hacked on the foul and headed to the foul line with an opportunity to tie the game.

Roberts calmly sank all three free throws to even the score at 50-all and force the second overtime.

In the second four-minute extra period, Willocks and Roberts took over the show as the senior Willocks totaled 10 points including two old-fashioned three-point plays and Roberts continued his smooth free throw shooting hitting a cool 6-of-6 to go along with a deuce to push the Cyclones to Tuesday night’s final at Sullivan East.

Roberts led the Cyclones in scoring with 26 in the contest with Willocks close behind with 22. Wilson tallied 14 points for Elizabethton while Nate Stephens added seven. Seth Carter (2) and Bryce VanHuss (1) closed out the Cyclone scoring.

Ellage paced South with 22 points. Drew Hoover also reached double figures with 15 points. Johnson finished with eight points for the Rebels with Dean and Harris chipping in with six points each.

The Cyclones will tip-off with East at 7 pm.