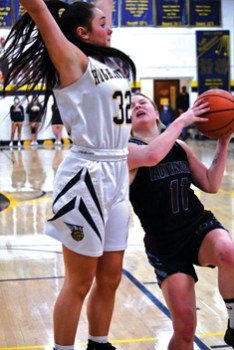 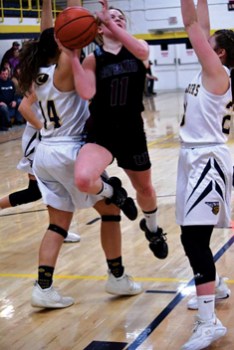 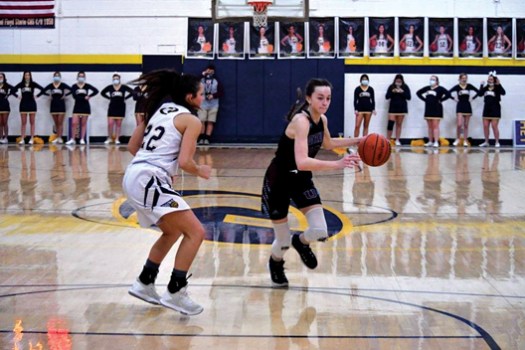 Star Photo/Jenny Jones Unaka's Lyndie Ramsey pushes the basketball toward the middle of the paint against the defense of Cloudland's Jasmine Birchfield. 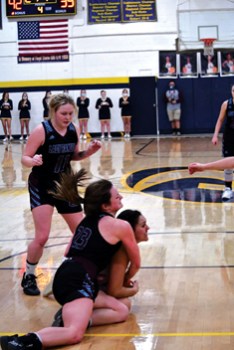 Star Photo/Jenny Jones Unaka's Macy Ensor and Cloudland's Mandy Benfield battle on the floor for possession of the basketball.

BY IVAN SANDERS
STAR SPORTS EDITOR
ivan.sanders@elizabethton.com
There was a whole lot more on the minds of players, coaches, and fans on Friday night in Roan Mountain than the District 1 semifinal contest between the Cloudland Lady Highlanders and Unaka Lady Rangers.

Cloudland head coach Matt Birchfield’s father Bill Birchfield passed away earlier in the week and both communities were in mourning as Birchfield had split time at Unaka High School and the last 25 years at Cloudland High School as a teacher and coach.

However, due to tight guidelines for the district and regional basketball tournaments the game had to be played and by the time the smoke cleared, the Lady Highlanders squeezed out a tight 43-42 victory that sent the Lady ‘Landers to North Greene on Monday night for the District 1-A title.

Unaka will battle Hampton for the third-place consolation game with all four teams qualifying for the regional tournament.

In the first half, it looked like Cloudland was going to run away from the Lady Rangers as the Lady ‘Landers built a 25-13 lead behind an eight-point outburst from Jasmine Birchfield.

Unaka’s Julie Simerly led the Lady Rangers in the first half with five points while offensive star Lyndie Ramsey was held to only three points in the first 16 minutes.

Kiki Forney dropped a trey and Mailey Guy added a deuce to make up the Lady Rangers first-half total.

Cloudland was fortunate they had a good first half as it was going to take every last point to help keep the Lady Rangers from pulling the upset as Unaka flipped the script on the Lady ‘Landers in the second half.

Ramsey caught fire in the final 16 minutes of the contest as the sophomore was hitting from everywhere scoring 22 points in the final half to almost single-handedly put her team out front.

Unaka outscored Cloudland 29-18 down the stretch.

The Lady Rangers put Cloudland on the charity stripe 22 times in the closing half where the Lady ‘Landers struggled to make only nine of those attempts.

Ramsey led all scorers in the game as the sharpshooter grabbed a game-high 25 points. Guy and Forney finished with six points apiece while Simerly added five points.