Melissa Grindstaff on the day of her heart transplant surgery. 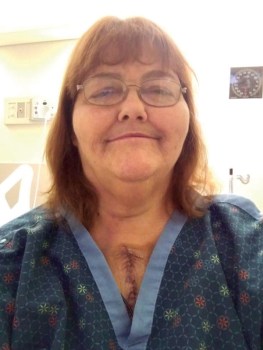 Melissa Grindstaff of Elizabethton counts herself a very blessed person having received a heart transplant March 10 at the Vanderbilt University Medical Center.
The 50-year-old Elizabethton woman says she is doing great and was expected to be transferred to the hospital’s hospitality house before week’s end to continue her recovery and rehabilitation.
“I feel great and I am very grateful for the gift of a second chance at living. I know for me to have this heart, someone had to die, and I feel so sorry for that family, who lost a loved one. The gift of their loved one’s heart gave me a new lease on life. Without the heart, doctors said I would live only another three to six months. God is so good,” Melissa shared this week from her hospital bed.
Melissa has waited for over a year for the transplant. She suffered a heart attack last May and had to have a pacemaker and defibillator implanted. At the time her heart was only working at 20 percent. Later, she developed an infection and the pacemaker and defibillator had to be removed. Her only hope was a heart transplant.
“Last week she went down to Vanderbilt for a stress test and some other tests and we had only been home one day when they called and said they had a heart for her, and they needed her back at the hospital,” said her aunt,” Glenda Norris, who has been at Vanderbilt with Melissa. “I usually take her back and forth to doctors’ appointments. I’m her sidekick,” Glenda added with a laugh.
“She is really doing  well. The doctors are amazed at her recovery,” Glenda said of Melissa.
“Melissa was in surgery about four and one-half to five hours. She was in intensive care until Friday night. She has been sitting up and is doing well. She will be at the hospitality house for four to six weeks,” Glenda shared.
Today in the United States approximately 30,000 people receive vital organs and about one in ten of them get a heart. Still, more than 116,000 people currently await organ donations, all of which are in short supply.
A spokesman at the Vanderbilt Heart and Vascular Institute noted that 20 people die every day waiting for a vital organ. At the same time more than half of all health recipients go on to live more than 13 years, and survival rates are always ticking upward.
Melissa will be on auto-immune medication for the rest of her life, but that’s a minor thing when compared to her getting a new heart and new lease on life.
Glenda said they were told Melissa’s heart came from a 35-year-old woman, and that five other people were on the waiting list.
Melissa, who lives at Village East Apartments in Elizabethton, has been disabled for some time due to a bad car accident several years ago. Her mother is Mary Atwood of Elizabethton, who was very happy that Melissa received a new heart and is doing well. “It’s really amazing,” she said.
Now that she has received a new heart, Melissa has high hopes for spring and summer. “I look forward to coming home and getting outside and enjoying the warm weather. I love spring and summer,” she shared.
She also looks forward to attending church again at Union Baptist Church in Hampton. “I can’t wait. God has been so good to me,” she said in praise.
The first heart transplant was performed Dec. 3, 1967, by South African surgeon Dr. Christian Barnard. The procedure took eight hours and a team of 19 medical professionals. When the transplanted heart began beating in its new body, the news ricocheted around the world. Sadly, the transplant recipient died 18 days later.
Transplant success has come a long way since them. Vanderbilt University Medical Center tied for first place as the busiest heart transplant program by volume in the United States in 2019. The VUMC performed a record 118 heart transplants that year — 96 adults and 22 pediatric patients — topping the previous year’s total of 109.
Melissa Grindstaff is more than just a statistic. She has a new lease on life because someone’s family unselfishly donated the heart of their loved one.
“I only live today because someone died, and I will always remember that,” said Melissa.