A nine-run second inning propelled Hampton to a 10-0 mercy-rule win over Avery County (N.C.) on Monday evening at Scotty Bunton Field. Senior day saw the Bulldogs get a big nonconference victory and closed out the season 14-10 overall having won 12 of their last 17 games.

Junior pitcher Caleb Royston was sharp striking out six and walking one while giving up just two hits. Last among Royston’s strikeout victims was Troy Smith and was the 100th of his career.

Hampton got a run in the first inning with Chase Point leading off with an infield single. Point stole second and went to third on a wild pitch. He then scored with Conor Jones at the dish when Avery starter Nick Banks uncorked a second wild pitch to give the Bulldogs a 1-0 lead.

The ‘Dogs sent 13 batters to the plate with Point drawing a bases-loaded walk to plate a run and junior catcher Morgan Lyons delivered a two-run single for a 4-0 Hampton lead.

An infield error brought home two runs including Lyons who beat a relay throw from first base and slid headfirst across the dish for a 6-0 ‘Dogs lead.

The hit parade continued with Parker Henry dropping down a perfect bunt down the third base line and Royston followed with an RBI single. A pair of runs came in on the second infield error of the inning and Hampton took a 10-0 lead,

“When we play well, we can play with anyone on our schedule,” Bulldogs head coach Nicholas Perkins said. “Caleb has had a nice junior year and when he has command of his curveball it sets up all his other pitches.

“It’s always fun to win at home. Early in the game, Lyons got the momentum in our favor with two caught stealing throws.”

Avery got hits from Nick Banks who started on the mound and James Harris who singled in the fourth.

Hampton will play Unaka in the play-in game of the District 1A tournament on Friday and with a win will take on North Greene. 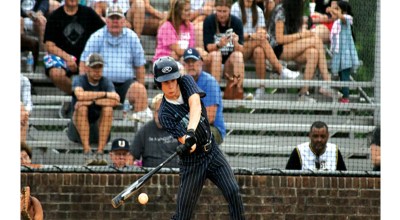 A round of golf for the Bulldog basketball program