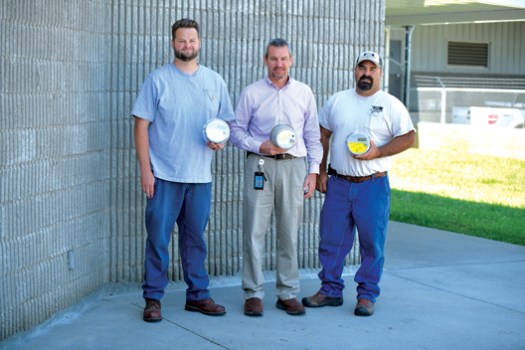 Star Photo/Ivan Sanders The Elizabethton Electric System is preparing to swap out 26,000 meters that will benefit both the consumer and the system. Pictured are (L-R) Grant Taylor, EES Manager Brandon Shell, and Chad Bowman. 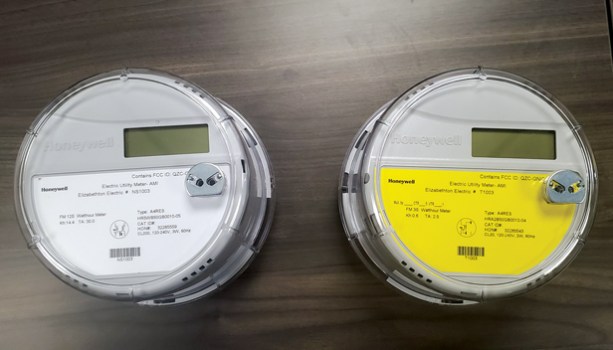 Star Photo/Ivan Sanders The new Honeywell meters that will be installed will help to quickly detect power outages, make it easier to turn power off and on, and give detailed data to help answer usage questions from customers. 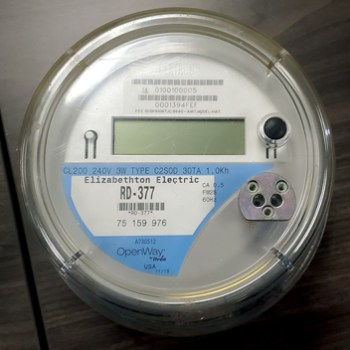 Star Photo/Ivan Sanders Pictured is one of the meters currently in use by the Elizabethton Electric System.

BY IVAN SANDERS
STAR STAFF
ivan.sanders@elizabethton.com
Beginning sometime in July, don’t be too concerned if someone driving a vehicle with the Elizabethton Electric System logo on it and wearing shirts and ID with the same knock on your door to inform you they are going to have to cut your power off.

It’s not that you haven’t paid your electric bill but because the utility system will be moving toward a newer technology in their meters swapping out the current meters with a Honeywell meter that will allow much more technological advances to benefit both the customer and the EES.

Power will only be off for a few minutes while the third-party company takes pictures of the current meter and base, inspects the base for any potential loose lugs for hot spots, and installs the new meter. The process allows for an inspection of all meters utilizing EES.

If a resident is not home or has a fenced-in animal that doesn’t appear too friendly, a blue door hanger will be left on the door asking the customer to call in and schedule a time for the contractors to come back and install the meter.

Contractors do not need to come inside a residence to make the changeover.

Customer Benefits
Power outages
In the middle of the night or if a customer is on vacation, we are going to know when the power goes out because the meter is going to send a signal back here and notify us of a power outage,” stated Shell. “If the power goes out in the middle of the night, when they wake up in the morning then the power will be back on and they won’t really know it’s been out.

“Vacations are a big thing as well because we have had people come home call in that their freezer is ruined and everything in the refrigerator is spoiled because when they came back home their power was out and they were the only customer on that tap.

“This will help to eliminate a lot of that.”

Single outages are one thing but what about when a large area loses power and a resident looks around the neighborhood and most of their neighbors have power back on but they don’t.

Shell said that will also be a huge benefit of having the new meters.

“It will keep you from missing a house or two here and there when you have the whole hollow back on. It’s hard to know if a pump went out, a single pump, went out before the storm or when the whole line went out,” commented Shell.

“We have that sometimes. You get everyone’s lights back on say in Hurley Hollow and then you move on up the creek and you start getting a couple of calls from up there where you have missed a transformer or something.

“Sometimes it’s just peace of mind to them to know for sure that they got to speak to someone. The outages will be tied into emails so when on the weekends the power goes out it will send an email to the on-call person.”

“If it’s like an apartment complex or someone is renting a house, in the past, we would have to go out and boot the meter where electricity couldn’t flow through it, and then when someone new moves in they have to go back out there again and pull the meter to take the boots off, stick it back in, and get the reading then come back in.

“Instead of having to wait on customer order workers to be able to go through all their cut on and cut-offs, while they are sitting there with the customer service representative, they will be able to cut it on or cut it off.”

Billing issues in regard to power usage
There are not too many customers who have not received an electric bill and almost fainted after seeing the total due for the month.

The new meters will constantly be sending data back to the electric system allowing the utility to make a deeper dive on why a customer’s bill is excessively high.

“You can look at the load profile and see what they are using and when they are using it,” Bowman shared. “It won’t tell you what is causing it but it might help to narrow it down.

“You can look at the usage and see when the most power is used to kind of help you determine what’s going on. You can look down at the day down to the hour and help you pinpoint that.”

“You could see that well we are not home from 8 to 4 but when we get home -you could see that peak going up. It could possibly show people what they are using and help them to cut back on usage.”

When asked about why it seems that the months of winter seem to bring higher bills even if customers feel they aren’t using as much or because the month was warmer, Shell broke it down using maintaining a set temperature in a residence.

“It’s not staying off as long and it’s running harder and when it gets down so cold, and the emergency strips come on on your heat pump, that’s when it’s really pulling a lot of electricity when those strips are on.”

Elizabethton Electric benefits
Theft prevention
All three of the men shared that theft of electric services are more common than what many people may think with individuals going to different measures to get power into a home – many time risking their own life to do so.

“These meters have tilt detection like when someone steals services,” Shell said. “You wouldn’t think about it but theft services is a real thing.

“There are some brave folks out there. We have found butter knives that have been sawed off to be the same length as those blades and shoved in to get power in the house.”

“When someone pulls that meter, we will get that alert so as far as someone tampering with a meter, this will give us a heads up that we might want to send someone out to check this out,” Taylor added. “This should cut down on theft of service.”

“We will be able to see at the end of the system what the voltages are. The farthest house away from a substation we can see what that voltage is because we are required by TVA to maintain plus or minus five percent voltage,” Shell stated.

“This will allow us to check that and if we have to hang capacitor banks or whatever we have to hang to get that voltage up and provide people with a better quality of power especially the ones way out toward the end of the system.”

“The longer the pull of wire, you have voltage drop so what you have coming out of the substation at the end of the line you may see a voltage drop,” Taylor explained.

“It’s the next step in our overall goal to make the system more efficient and reliable,” said Shell. “This will help us going forward to provide more reliable and affordable power to the customer.

“As far as us saving truck rolls and things like that, that is going to be great. It will help us save money which in turn will help us keep rates lower.”

According to Shell, the EES is a late holdout to make the changeover as many systems have already done so. With COVID shutting down many plants at one point or another, it put the system behind the eight-ball in receiving delivery of the meters.

There have been a total of 26,000 meters ordered with the total estimated cost of the project falling just under $4 million.

Shell said that the system is shooting to get the project completed in six months once the meters begin rolling out and the meter changeover will be done my meter routes.

A total of 21 routers will be placed in substations allowing communication between the meters and the electric system.