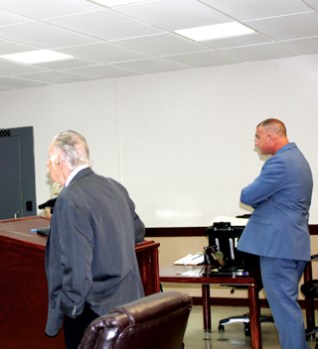 Star Photo/Kevin Green Pictured left is Papantoniou and on the right is Tim Horne, assistant district attorney, in court Monday where charges against Papantoniou were dismissed. 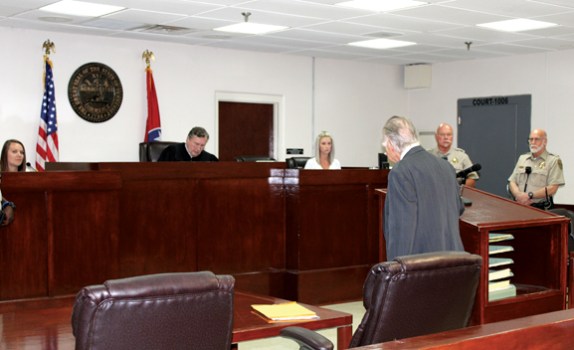 Papantoniou was in court facing a two-count misdemeanor warrant of simple assault and disorderly conduct that was placed against him by CCSD Deputy Dakota Mullins because of an altercation that occurred in the lobby of the sheriff’s office on Oct. 7 of last year.

Judge Shults was presiding by designation as a result of an earlier recusal by sessions court judge Keith Bowers, who cited unspecified previous professional and personal ties to the former sheriff.

Assistant DA Tim Horne began the hearing by advising the court Deputy Mullins was not available to testify against Papantoniou.
Horne told the court that Deputy Tonya Range was also assaulted during the incident and was prepared to testify.

However, Mullins was the only cited victim of the alleged assault in the charging documents.

Papantoniou, who is 85 years old, was unaided by counsel. He told the judge that he had previously hired an attorney out of Knoxville who put in an appearance but dropped the case without explanation and returned the retainer fee that Papantoniou had paid him.

Papantoniou asserted that he had a “right to confront his accuser,” referencing the 6th Amendment to the U.S. Constitution that does establish a right to confront witnesses in a criminal action.

Shults after hearing from both parties again confirmed with Horne that Mullins was not there and that the state was not going to proceed on charges.

Horne reiterated that the state could not proceed on the case as presented in the charging documents by Mullins.

The judge then turned to Papantoniou. “…I think you are going to like what I am going to say, Mr. Papantoniou,” Shults said, “I am going to dismiss the warrant. It will be dismissed. Do you know what that means? It is over with; it is done.”

Horne did confirm that the matter was indeed over with when asked if the state planned on considering new charges against the former sheriff.

“There were some deficiencies in the warrant that the state could have, and probably should have, correct prior to [the hearing],” said Horne.

“I think the statute would prohibit us it, and since we are guardians and the gatekeepers of the courtroom, so to speak, I think we would be prohibited from that and we are going to honor that,” Horne added.

The Elizabethton Star reached out to Papantoniou for comment and the former sheriff was satisfied with the dismissal.

“The reason I won my case yesterday, I had the best lawyer in the world. It was God, and he does not like injustice,”  said Papantoniou.