Sycamore Shoals State Park will celebrate Independence on the Frontier 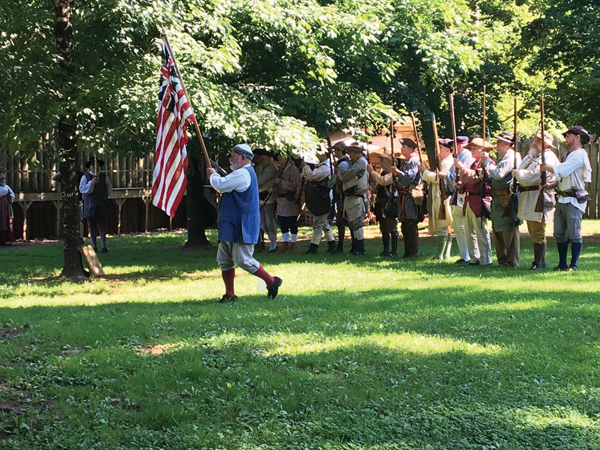 The Washington County Regiment of the North Carolina Militia will celebrate Independence Day on the Frontier Saturday at Sycamore Shoals State Park. Activities will begin at 10 a.m. and continue until 4 p.m. A special reading of the Declaration of Independence will be given at 1 p.m.

The public is invited to step back in time — say 245 years ago — and witness life on the frontier during a very tumultuous time. In the summer of 1776 colonial leaders met in Philadelphia to draft a document that would forever change the world — the Declaration of Independence.
By today’s standards information traveled slowly in the 18th Century. Saturday at Fort Watauga at Sycamore Shoals State Park, the community is invited to be a part of the excitement as re-enactors go back in time to when the news of American independence finally reached the colonial frontier. Walk with the historical re-enactors and hear their varied reactions to the Declaration — from fear of war to the hope of a brighter future.
The celebration Saturday will be presented by the Washington County Regiment of the North Carolina Militia, host living history organization at Sycamore Shoals Historic Area. The group will be garrisoned in and around Watauga Fort. The militia muster will include a myriad of activities throughout the weekend allowing guests the opportunity to step back in time and experience daily life on the colonial frontier in 1776.
The highlight of the day will be a special reading of the Declaration of Independence inside Fort Watauga at 1 p.m. The event is free and open to the public and will begin at 10 a.m. and end at 4 p.m.

Kids Talk About God: Why does God bless peacemakers?