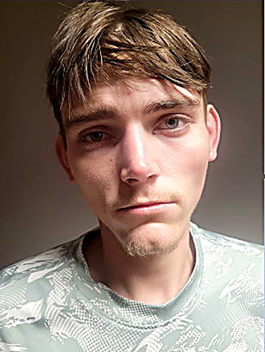 According to Washington County Sheriff Ed Graybeal, a Johnson City man is in custody following a shooting investigation that began in the Telford area. Jonathan R. Hughes, 22, 1220 Indian Ridge Road, was arrested late Tuesday evening, on charges of felon in possession of a firearm, aggravated assault, and felony evading arrest, violation of probation and possession of methamphetamine.

Deputies were called to the 109 Leona Road area in Telford to check the victim who was sitting inside his truck when he was shot in the leg, at a different location. Jason A Phillips, 37, (the victim), named Hughes as the shooter and gave details about an argument that had occurred prior to the shooting incident. The victim was transported to JCMCH where he had the bullet removed from his leg and is currently in stable condition.

Hughes had fled the area in a black Chevrolet Blazer and deputies located him at 120 McCurry Road in Limestone, a short time later. Before deputies could take him into custody Hughes sped from behind the home in the Blazer, initially driving through a field prior to making his way to the roadway. Deputies pursued Hughes on Horace Dillow Road, Bailey Bridge Road, Frank Stanton Road, Highway 107, and Chuckey Pike, in Greene County, where Hughes was stopped and removed from the vehicle.

Investigators recovered a 9mm semi auto pistol from the Blazer, along with drug paraphernalia and other items. Investigators discovered two outstanding warrants on Hughes, one for violation of probation and one for possession of methamphetamine.

Hughes has no bond and appeared for arraignment Thursday morning at 9 a.m. in Sessions Court, and next term of Criminal Court on his violation of probation. The Greene County Sheriff’s Office and the Tusculum Police Department assisted.