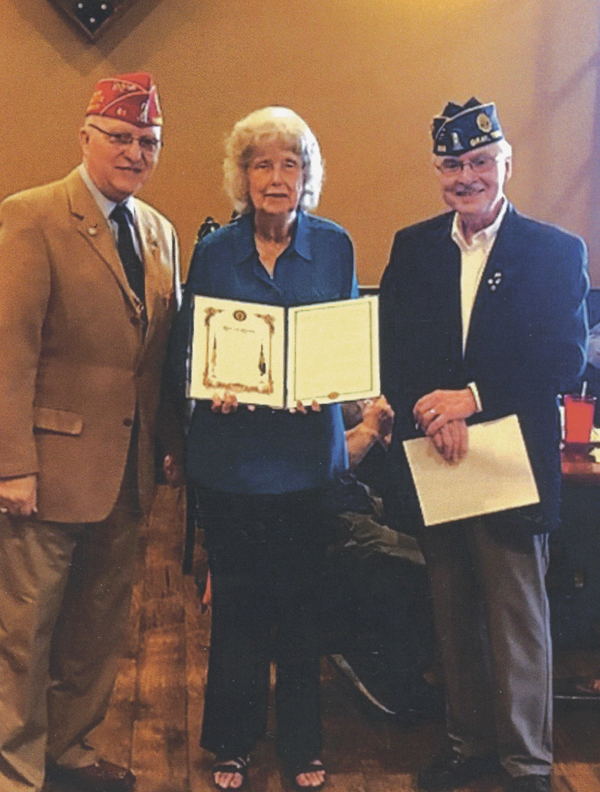 A ceremony was held at the Black Olive Restaurant in Elizabethton on June 19, 2021, to posthumously pay tribute to local retired Vietnam Veteran, Sergeant First Class Curtis Stonecipher, who was laid to rest April 30, 2017, following a long illness from disabilities sustained in Vietnam.
In admiration to this gallant Veteran the members of Post 255 petitioned the American Legion National Headquarters to permanently name their post after SFC Stonecipher, who was a past Post Commander and founding member of Post 255. Curtis was held in high esteem by his comrades at Post 255 who simply knew him as “Stoney,” for he was a towering man who stood like a rock when he fought for Veterans rights.
The ceremony was opened by American Legion Post 255 adjutant Carter, who addressed SFC Stonecipher’s numerous military achievements, and observed one example of this Veteran’s dedication to service. SFC Stonecipher was severely injured in Vietnam and medically retired from the Army, but he felt he could still serve his Country and sought Congressional support in his request to return to active military service. He prevailed, was returned to active duty and after several more years of honorable service was granted his second and final retirement. In retirement Curtis continued his service as a member of the American Legion where he assisted many Veterans in obtaining a wide range of VA benefits.
American Legion Past Department Commander Bob Hensley and Post Senior Vice Commander Doug Mancabelli presented the family with a copy of the permanent charter which states, “This Permanent Charter is granted by the American Legion National Headquarters and Department of Tennessee, effective the 27th day of August, 2020. Under this Charter the Gray Post will henceforth be known as SFC Curtis Stonecipher Post No. 255.”
Ending the event American Legion Post 255 Commander Gene Egan presented the family with the Post Everlasting Resolution which reads “whereas, it has pleased Almighty God, The Great Commander, to summon to the immortal legions our beloved comrade, Past Commander SFC Curtis Stonecipher, and, Whereas, we humbly bow to the will of Divine Providence, while ever cherishing in our hearts the memory of Stoney’s distinguished service to our country and outstanding contributions to The American Legion. The American Legion does morn the passing of our comrade, Commander Stonecipher, and be it Revolved, that in token of our common grief, a copy of this resolution transferring Curtis Stonecipher to Post Everlasting be presented to the next of kin.”