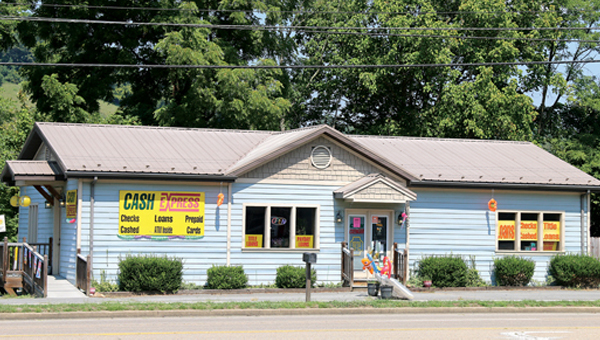 Star Photo/Nic Miller Cash Express is located at 1825 West Elk Avenue in Elizabethton and welcomes anyone to sign the poster boards that will be delivered to the area's first responders on September 9th.

Each year on the date of September 11th, millions of people from across the country take time to reflect on and remember the citizens and first responders involved in the terrorist attack that took place on that fateful day.

And while people in and around Carter County will be doing that very thing this year, Cash Express in Elizabethton is taking things the extra mile with an event that they hold each and every year for the area’s first responders.

Ashley Newman, Assistant Manager with the Elizabethton location of Cash Express, spoke about the celebration for Carter County’s first responders, saying, “In remembrance of 9/11, we try to show our appreciation for all of our first responders by delivering items to them such as a cake.

“We also have poster boards that we take to them that features things like the police prayer, EMS prayer, firefighter prayer and are also signed by customers or anyone who would like to show their appreciation.”

Newman stated that this was not a recent initiative by the location, as the business has been honoring first responders on September 11th much longer than she has worked there.

It is a very special thing not only for the first responders who receive the items, but also for those who deliver the gifts. Newman explained her favorite part about showing appreciation, saying, “My favorite part is to be able to see their faces when we deliver these things.

“We want them to know that they are appreciated by their community, and you can tell that it really means a lot to them when they receive those items.”

And while the celebration takes place to honor the anniversary of September 11th, Newman explained that things may look a little different this year. “Because September 11th falls on a Saturday and everyone will be out of their offices on that day, we will be delivering the cake and the poster boards on September 9th.”

Newman says that anyone in the community who would like to show their appreciation to Carter County’s first responders is more than welcome to, and can stop by Cash Express to sign the poster boards that will be delivered.