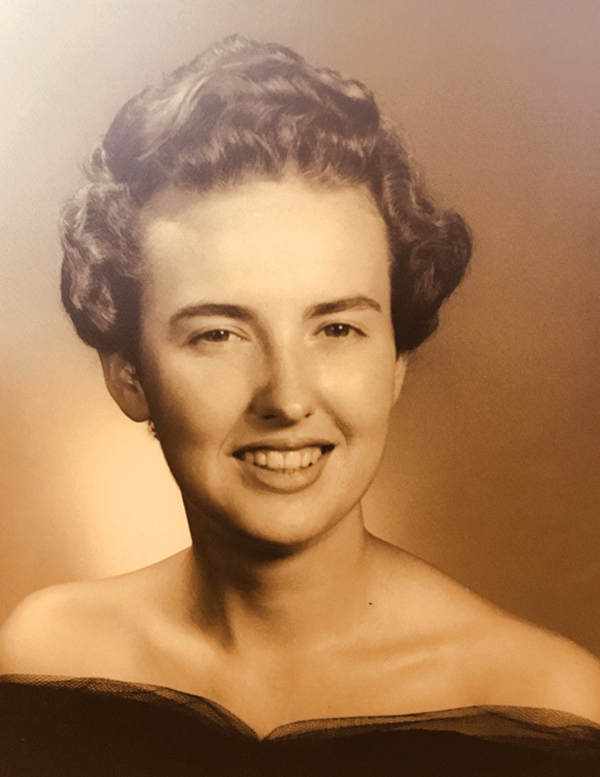 Barbara Faye Moody Shoun was born March 12, 1942 in Spruce Pine, N.C. to Della Cable Moody and George Moody. Barbara spent her early childhood in Heaton, N.C. until the sudden passing of her mother, Della, in 1955. At the tender age of 13, Barbara moved to Elizabethton and was adopted by her mother’s sister and husband, Alma and Ben Cannon. Alma and Ben provided a loving Christian home to Barbara and her adopted brother, Ted Cannon, on Hemlock Street.
Barbara graduated from Elizabethton High School, Class of 1959. She attended flight attendant school but quickly realized that jet set life was not for her. Like the words of a country song, in 1960 Barbara met the love of her life, Fred H. “Sonny” Shoun, of Stoney Creek, on a blind date at the Blue Circle, while sitting on the hood of a car, filing her nails with an Emory board. This handsome young Air Force veteran stole her heart and they eloped 6 weeks later.
In 1961 Barbara and Sonny welcomed their daughter, Anne, and in 1965 their son, Gene. As a family, the Shouns enjoyed life to the fullest with an open door to all their friends, family, neighbors, community kids and animals. Their home was filled with singing, laughing, practical jokes, funny nicknames, playing pinochle and hosting neighborhood get-togethers.
“Avid Fan” doesn’t adequately express Barbara’s love for Tar Heels Basketball and the former Elizabethton Twins. During the ’70s and ’80s, Barb and Sonny were Twins season ticket holders and were summer family hosts for many of the players that got their start playing minor league ball in Elizabethton, including many of the future members of the ’87 and ’91 World Series Champs. The Shouns frequently traveled with the team to their away games to Virginia, West Virginia and Kentucky. Many lifelong friendships were forged supporting the former Twins.
Barb worked at Raytheon of Bristol, and Hammond Organ of Elizabethton. However, in the mid 1980s she realized her true calling was caregiving to seniors. Barb loved her retired ladies and was known as ‘the best cleaning lady’ of Elizabethton in the ’80s and ’90s.
Barb had been a member of Calvary Baptist Church since 1955 where she served as a Sunday School teacher, GA leader and Youth mom. She never met a dog she didn’t LOVE and for many years was the President of the Carter County Humane Society. For more than two decades Barbara was a member of the Johnson City Brunswick Bowling League and the Elizabethton Red Hat Society.
Barbara looked into the eyes of Jesus on Wednesday, August 25, and was preceded in death by her mother and father, Della Moody and George Moody; her bonus mom and dad, Alma and Ben Cannon; her brother, Ted Cannon; her half-brother, Ronnie Moody; and her husband of 55 years, Sonny Shoun.
She is survived by her daughter and son-in-law, Anne and JD Byrd of Buffalo Valley, Tenn.; her son and daughter-in-law, Gene and Katherine Tyler Shoun of Elizabethton; four grandchildren and one great-grandson.
The family wishes to extend a very special thanks to Ivy Hall Nursing Home staff which were truly a second family to Barbara. She loved you all very much. Thanks is also extended to Amedisys Hospice.
Services for Barbara will be held on Saturday, September 11, at Tetrick Funeral Home, Riverside Chapel, Elizabethton. Receiving of friends will be from 12-1:30 p.m. with funeral services following. A private graveside service, for immediate family only, will be held at Happy Valley Memorial Park. The family asks that in lieu of flowers, donations be made to: Carter County Humane Society, P.O. BOX 134, Elizabethton, TN 37644
http://www.cartercountyhumanesociety.org. Online condolences may be shared with the family on our website, www.tetrickfuneralhome.com
Tetrick Funeral Home, Elizabethton, is honored to serve the Shoun family. Office: (423) 542-2232. Service Information Line: (423) 543-4917.