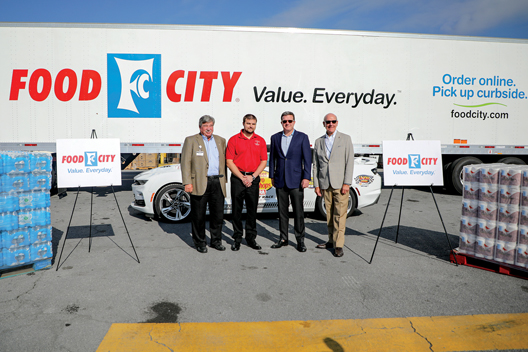 ABINGDON, Va. — In their continued efforts to aid the victims of the devastating flooding in Hurley, Va., Food City is teaming up with Bristol Motor Speedway to provide additional support for relief efforts.

“Our friends and neighbors in Hurley, Va., have suffered catastrophic loss from the flooding that devastated their community over a week ago. The Virginia Department of Emergency Management estimates that it could be several months before power is restored to many of the residents and possibly a year before water is fully restored to the area. We certainly want to do everything we can to assist them during this critical time,” said Steven C. Smith, Food City president and chief executive officer.

Earlier today, Bristol Motor Speedway officials announced that they are donating a truck load of water to the Hurley community and encouraging guests who visit during race weekend (Sept. 16-18) to drop off cleaning supplies and bottled water to the Guest Welcome Village Center in the North Lot.

“Our thoughts and prayers are with all of those affected by the torrential flooding and severe outages in Hurley,” said Jerry Caldwell, executive vice president and general manager, Bristol Motor Speedway. “Just as we’ve done in the past, when we see a neighbor in need, we want to lend a helping hand. We’re grateful to our partners at Food City for rallying us all together to help support those affected by these difficult circumstances.”

Food City also announced the donation of a truck load of paper products by Cardinal Tissue, based in Spindale, N.C., to aid area flood victims and is working with other members of their vendor community to acquire additional product donations.

“We’re blessed to have the opportunity to work with so many great community partners, who are always willing to come alongside us when there’s a need in the communities we serve and we would certainly like to thank our friends at Bristol Motor Speedway and Cardinal Tissue for making these essential donations possible,” said Smith.

Last week, Food City pledged a $10,000 contribution to kick off their fundraising campaign, which is currently underway through September 12 in the Tri-Cities, Southwest Virginia, and Eastern Kentucky Food City locations. Customers wishing to participate can make a monetary donation at the checkout. One hundred percent (100%) of the funds collected will benefit United Way of Southwest Virginia’s Disaster Relief Fund for Hurley.

Food City also donated a truck load of water to area flood victims and the Food City in Vansant, Va., and Super Dollar Food Center in Grundy, Va., are accepting donations of cleaning supplies and nonperishable foods to benefit flood victims. Special collection containers are located at the front of the store.

A Life Lived: Leslie Head was a man of…