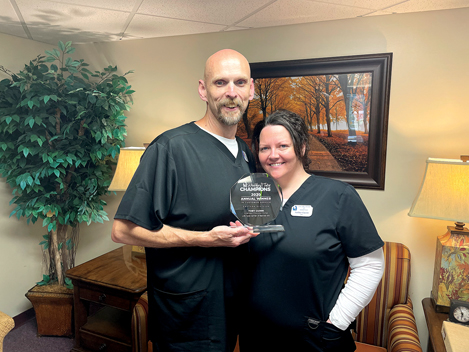 Contributed Photo Toby Guinn pictured with his wife and the Life Care Centers of America’s Eastern Division Whatever It Takes And Then Some Award.

BANNER ELK, N.C. — Toby Guinn, licensed practical nurse at Life Care Center of Banner Elk, received Life Care Centers of America’s Eastern Division Whatever It Takes And Then Some Award on May 13 for his dedication to customer service.

Life Care awarded Guinn a $1,000 cash prize during an awards ceremony at the facility. Facility leadership surprised Guinn, who was told he needed to watch a training video. When the video started, it was actually a video of fellow associates at the facility, as well as residents, talking about what they appreciate about him.

“I’ve never been more surprised — I was blown away,” Guinn said. “There are so many deserving people that I can think of. The people you work with make you better, and I work with the best.”

Guinn was chosen from among thousands of associates in the Eastern Division and was one of only eight associates from Life Care’s more than 200 facilities nationwide to receive the award.

Guinn, who has worked at the facility full time since 2008, is famous for throwing Super Bowl parties for the residents at his own expense. In 2020, the party was one of the last group activities before the pandemic social distancing rules went into effect. This year, although residents couldn’t congregate, he went to McDonald’s on Super Bowl Sunday and bought a cheeseburger for every resident on his hall who wanted one. He has also been known to pick up several associates during bad weather to ensure they made it safely to work.

“Toby buys the residents extra things when they’re needing and gives them extra attention and lets them know that he’s really there for them,” said Julie Ward, accounting clerk.

Guinn shared, “When I was growing up, the love of my life was my grandmother. My grandmother was a CNA until 1966. She became an LPN in seven days because they needed nurses so bad, and I would hang on her hip when she was at Ivy Hall Nursing Home in Elizabethton, Tenn. She helped get that started, and I enjoyed going and spending time with her. I saw how she treated her residents, the way she wanted to be treated, and I think it spilled over to me. It’s just so easy to be good to these people here.”

Life Care’s Whatever It Takes And Then Some program rewards associates for extraordinary acts of kindness. Monthly awards are presented in Life Care facilities nationwide based on nominations from fellow associates, family members, residents and guests. Each facility then chooses an annual winner, from which the divisional winners are selected.

Life Care Center of Banner Elk, located at 185 Norwood Hollow Road, is one of two skilled nursing and rehab centers in North Carolina managed by Life Care Centers of America.