City of Elizabethton awarded excellence in governance award by TML 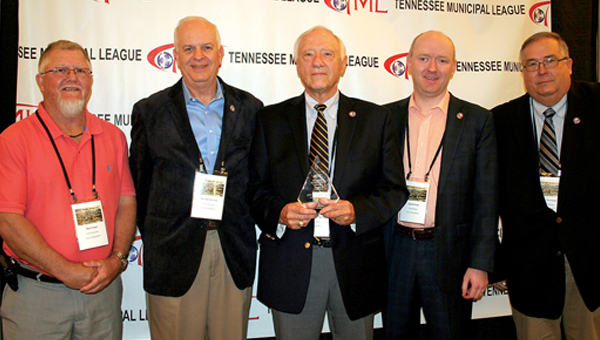 The City of Elizabethton recently received an award for excellence in governance by the Tennessee Municipal League.

The award was presented to the city on Sept. 1, with members of Elizabethton’s City Council as well as Mayor Pro-Tem William Carter and City Manager Daniel Estes invited to the ceremony.

“Renovations to the City’s Downtown, upgrades to city infrastructure, emergency and public works equipment,  and improvements to municipal parks and recreation facilities are among the numerous accomplishments the City of Elizabethton has achieved through cooperation of elected officials, city administration, and city employees,” read a statement released by the municipal league.

The league also highlighted a few specific accomplishments the city has been able to achieve thanks to those working within the governing body, such as the renovation of historic Downtown Elizabethton; the implementation of electronic software to make council meetings more efficient; investments to parks and recreation projects such as the Elizabethton River Riders ballpark; and renovations to numerous emergency service buildings.

Upcoming city projects recognized also include a $4 million electric metering upgrade and a renovation to the Covered Bridge Park in the downtown area.

Nearby Johnson City received an award for Excellence in Public Relations.

The Tennessee Municipal League was founded in 1940 and is based in the state’s capitol, Nashville. It serves as the voice and advocate for all of Tennessee’s 345 towns and cities.