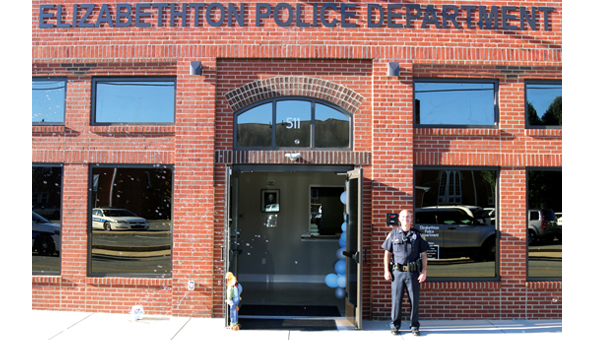 Almost a year after work began on its newly renovated building, the Elizabethton Police Department held a special open house at 511 E. F. St. on Friday.

“We are very proud of our new space, and it is very awesome to see that everyone is able to work in the same area as opposed to when the investigators worked in the basement of the library a couple blocks away,” said Chief Jason Shaw.

The department previously was housed in a small nearby building, but it now occupies two larger buildings.
The space that used to be home to Ritchie’s Warehouse has been transformed to the workspace for the Elizabethton Police Department, filled with offices and interview rooms and designed to make serving the community more efficient and convenient.

The renovation also allowed the department to add a training room,  an upgraded evidence room, a watch commander office, and a decontamination room for officers to clean themselves or change uniforms.  “We never had a decontamination room as well as many of the new offices that we have now, so it is really great for the whole department to be comfortable where they are working,” Shaw said.