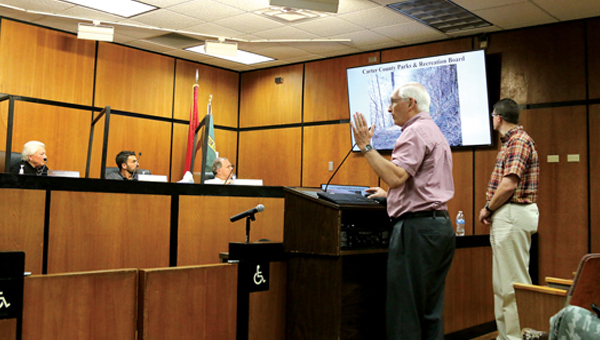 Star Photo/Nic Miller Carter County Parks and Recreation Board Chairman Ken Gouge speaks in front of the Johnson City Commission in regard to an expansion project for the Tweetsie Trail which stretches from Johnson City to Valley Forge.

Efforts to renovate an old bridge on the Tweetsie Trail will require a partnership between the Johnson City Commission and Carter County Commission, officials said this week.

Representatives of Carter County attended the city meeting this week to talk about the expansion of the Tweestie Trail, which stretches nine miles from Johnson City to Valley Forge.

“In the Spring, Carter County was given a piece of land that included the Tweetsie Railroad right-of-way between Valley Forge and Hampton. It includes beautiful view as well as a tunnel on the Valley Forge side, and on the Hampton side the roadway is in great shape,” said Ken Gouge, recreation board chairman.

“However, the most serious issue is how travelers can cross the river. Right now there is an old bridge that is in very poor condition. It is usable and people use it everyday, but there needs to be renovations made if it were to be used as a part of the Tweetsie Trail system.”

Gouge said the bridge renovation will cost $500,000 to $700,000 while the entire proposed renovation project could reach cost $1.25 million, so he and the county officials are seeking a partnership with city leaders.

Johnson City Commission verbally gave support to the project and will be providing a letter of support within two weeks.