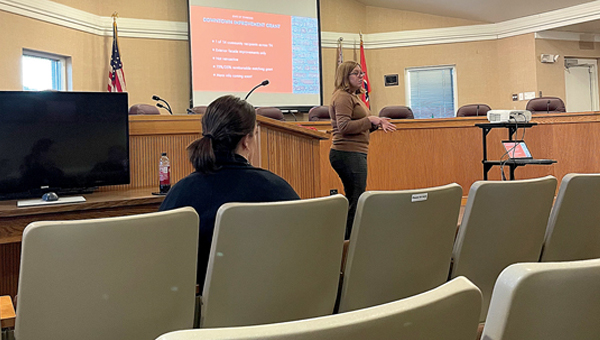 More than 25 people attended a meeting on Monday to learn more about $10,000 in facade improvement grants available for downtown properties.

The meeting was hosted by the City of Elizabethton and Main Street Elizabethton, which are administering the Facade Grant Rehabilitation Grant Program. A total of $10,000 will be provided in matching grants of up to $2,000 to applications for improvements to downtown faces.

“This grant applies to businesses that are located in the Main Street District of Elizabethton, and more specifically those that have a service, retail, or mixed-use occupancy with an active first floor accessible to the street,” said Logan Engle, director of economic development for the City of Elizabethton. “It is a reimbursable grant, and is one that requires a 50 percent match from both the city and the business.”

The grants can be used for such projects as masonry repairs, repairs or preservation of historically significant architectural details, exterior painting, window or door repair, replacement or repair of awnings and canopies and sidewalk barriers for outdoor dining areas.

“It is very important to remember that even if you believe that you are going to receive these funds, to not begin working on a project until you have officially been awarded the grant,” Engle said.

Applications are due by 5 p.m. on Nov. 24. Grants are expected to be awarded in the weeks after the application process has concluded.