Bulldogs win in the trenches to take first-round victory, 21-0

BY AUSTIN ALEXANDER
STAR CORRESPONDENT
HAMPTON – The chill of fall was in the air at Hampton as the Bulldogs welcomed in the Monterey Wildcats for a first-round matchup in the TSSAA 2-A state playoffs.

Two teams with very similar styles were only separated by turnovers at the end of the game as Hampton would win the turnover battle 3-0 and win the game, 21-0.

The Bulldogs started the game on the defensive side and it didn’t take long for Hampton to get the offense on the field. The first play from scrimmage for the Wildcats was a flea-flicker gone wrong with a fumble recovered by McKinley Kuhn.

A short drive on a short field led to the first score of the game with Conor Jones calling his own number and sprinting it in from eight yards out. A Michael Harrison extra point would give the Bulldogs the 7-0 lead.

Monterey would takeover hoping to avoid the disastrous fate of their first drive and the Wildcats got the ball moving. However, their promising drive was killed by a Conor Jones interception and again Hampton took over.

Levi Lunsford continued his ground assault as the Hampton front looked absolutely dominant. A huge pass from Jones to Chance Point was good for 36 yards and a first down. Jones ran it in from 15 yards out making it 14-0.

The two teams would exchange punts on back-to-back possessions and Monterey would take over.

The Wildcats put together a 15-play drive that led ultimately to a turnover on downs. The crushing drive for Monterey summed up their first-half experience of being close, but not quite there.

The Hampton offense would run the clock out behind Morgan Lyons and Lunsford and at the half, the Bulldogs held a 14-0 advantage.

Coming out of the half, the Monterey defense stood stout to the running game of the Bulldogs and quickly forced a punt.

The Wildcats once again started a promising drive, thrashing the Hampton defense through the air with back-to-back massive passes. However, the Monterey offense would again turn it over in the form of a Ryan Crumley fumble recovery to halt any and all of the Wildcat momentum.

A huge connection from Jones to Point for 35 yards was negated by a series of penalties that followed. Eventually, the Bulldogs turned the ball over on downs and Monterey would hit it again.

The Wildcats tried to move the ball the best they could, but the Bulldog defense had seen enough of the Monterey offense and forced yet another punt.

A draining drive would follow from the Bulldogs as they would chip away down the field over 11 plays before Jones again punched it in himself. Harrison connected on his third successful PAT and the score stood at 21-0 early in the 4th quarter.

Feeling the game slip away, Monterey would again try and get the offense going, but the Bulldogs again shut them out and another Wildcat punt would ensue.

The offensive line from Hampton continued their dominant showing with the final drive that would salt away the game for the Bulldogs. Lunsford, Crumley, Jon Greenwell and Jones pounded the ball and ran the clock out for a first-round playoff victory.

Next up for the Bulldogs is a date at Rockwood for a round of 32 matchup in the TSSAA 2-A football playoffs. 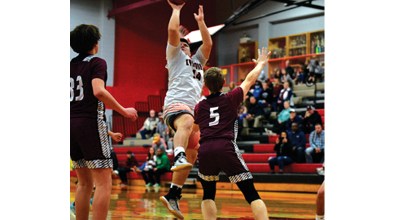