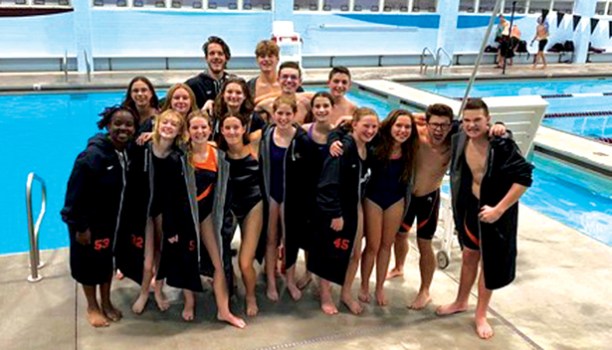 Photo Contributed by Kelli Broussard The Elizabethton swim team opened their swim season on Thursday with a win on the road at Tennessee High.

CONTRIBUTED BY KELLI BROUSSARD
The Cyclones swim season began Thursday night with a win versus Tennessee High. The Cyclones men and women scored 117 points, just one point more than the Vikings for the victory.

The 17-member team, several of them brand new to competitive swimming, gave spectators a fun show that started with both the men and women winning their 200 Medley relays.

“Our men’s relays are going to be exciting to watch this season,” stated Coach Kelli Broussard. “There is a possibility that our boys may break the school record in one, if not both, the 200 Medley and 200 Freestyle relays this season.”

Freshman Liam Cannon continued the exciting start to the meet by dropping 44.60 seconds from his previous best time in the 200 Freestyle. Later in the meet, Cannon achieved a second personal best time in the 100 Breaststroke by cutting another 4.50 seconds for a time of 1:19.62.

Senior Elijah Smith also turned in a personal best time of 1:12.83 in the event. Earlier in the meet, Smith turned in a time just .37 off his best in the 50 Freestyle. Last season, Smith qualified and competed at the State Championships in the sprint event.

Coach Broussard believes Smith has a good chance to go back to State this year in the 50 and is hopeful he will qualify in at least one other event as well.

Last year’s other State qualifier, sophomore Kody Broussard, turned in winning times in the 100 Butterfly and 500 Freestyle, both events that he competed in at State last season.

Another returning sophomore, RJ Brewer, also swimming the 100 Butterfly, cut over nine seconds from his previous best time in that event and more than half a second in his 50 Freestyle for two more personal-best marks.

Both coaches believe Morgan will be a third state qualifier this season in these events.

“We’re very excited about the possibilities for our boy’s team this season and looking forward to the trip to Knoxville to compete at the University’s Allen Jones Aquatic Center in February,” stated Coach Broussard.

“We are so impressed with how much our new swimmers have improved only 10 days into the season,” said Coach Broussard.

Freshman, Baylor Hopland, who has swum for TA Dugger and the Typhoons Swim Club, recorded personal best times in both the 500 Freestyle and 100 Backstroke. Returning sophomore, Cadie Digby, swam the 200 Individual Medley and 100 Freestyles.

Coach Broussard is optimistic that Digby is another Cyclone that will qualify for State this season in multiple events.

Junior Ally Brewer was pivotal in the team’s win by scoring three points for the team in the 50 and 100 Freestyles. Junior and team Captain Olivia Markley, nicknamed by fans “The Creeper” for her ability to stalk her competitors in the water, lived up to her namesake in the Breaststroke leg of the Medley relay.

The Cyclones compete next on Saturday, Nov. 13, and Thursday, Nov. 18 at the Kingsport Aquatic Center.