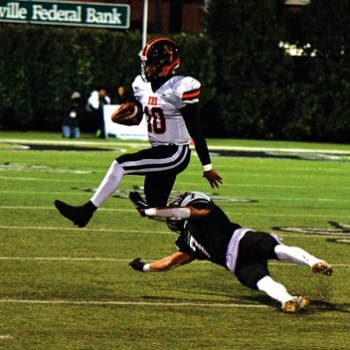 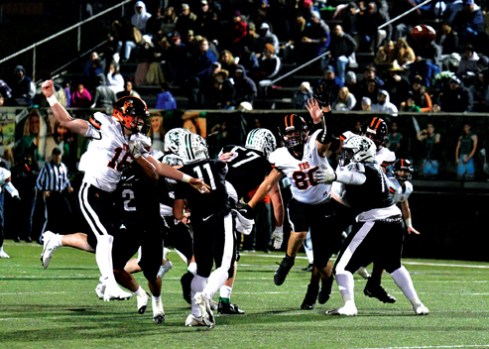 Star Photo/Ivan Sanders Cyclone receiver Jake Roberts picks up a key first down after a quick outside pass on the game's final drive. 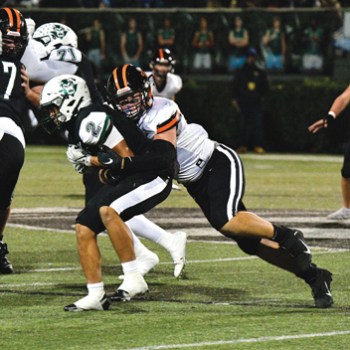 Star Photo/Ivan Sanders A Cyclone defender wraps up the speedy Mason Gudger from behind for a loss. 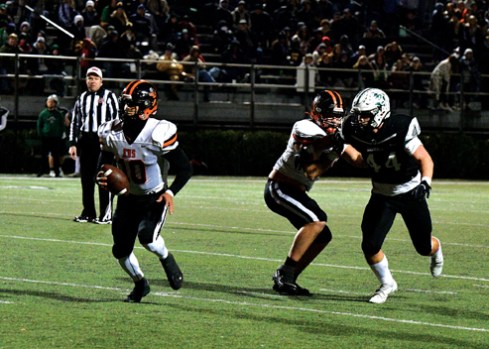 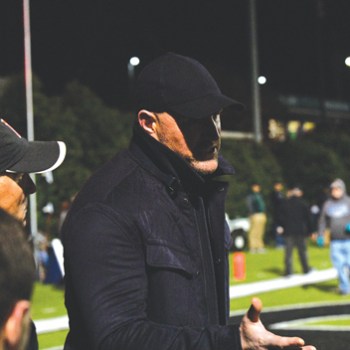 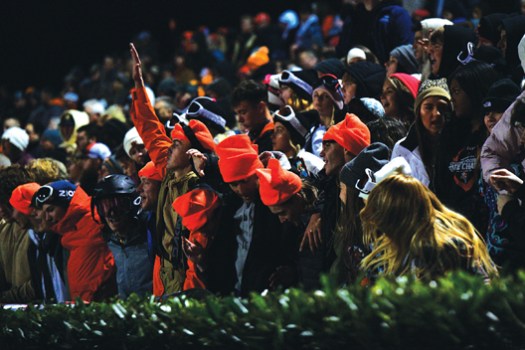 Star Photo/Ivan Sanders The Elizabethton student body gets ready to let lose as their Cyclones are just moments away from a big win. 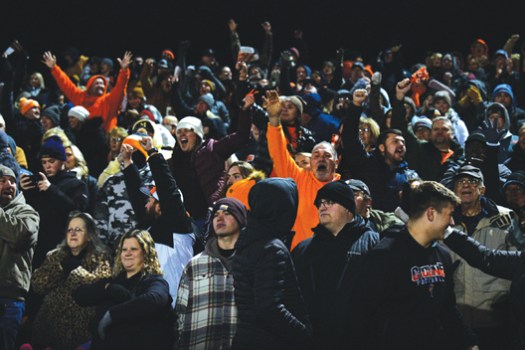 Star Photo/Ivan Sanders Cyclone Nation begins to celebrate in the waning seconds of the contest.

BY IVAN SANDERS
STAR SPORTS EDITOR
ivan.sanders@elizabethton.com
GREENEVILLE – The undefeated Greeneville Greene Devils were feeling confident enough during pre-game warm-ups that they were chirping toward the Elizabethton Cyclone student body.

By the time the final horn sounded, one could have heard a pin drop from across the way as the Cyclones celebrated an exhilarating 13-7 victory at midfield that ended the perfect season for the Greene Devils and propelled the Cyclones to next week’s TSSAA Class 4-A State Semifinal contest at Citizens Bank Stadium against Upperman, a 42-28 winner over Red Bank.

The Greene Devils won the gold ball in 2017 and 2018 while the Cyclones have prevailed in the 2019 and 2020 seasons. The Greene Devils took the first meeting between the teams in 2021 with a 42-12 whipping of the Cyclones during the second game of the regular season at Citizens Bank Stadium.

There was a whole different plan for this evening, however.

The Greene Devils scored the first points of the game after a tightly played 0-0 first quarter as Adjatay Dabbs cradled a 31-yard scoring pass from Brady Quillen with 10:26 left in the first half.

The Cyclones didn’t let the score rattle them and took the kick and methodically marched down the field eating up the clock and the yards as well before Cade Russell blasted into the end zone with 3:42 showing before intermission.

Sean Smithdeal split the uprights and the game was knotted at 7-7.

The half came with the 7-7 score with Greeneville slated to receive the second-half kickoff.

Coming out of the locker room, both teams played the third quarter just like the first with slobber knocker defense and neither offense able to punch the ball across the goal line.

The Cyclones had possession of the football to open the fourth quarter of regulation after picking up critical third downs along the way at the closing of the third quarter and turned the drive into six points when quarterback Bryson Rollins threw a Patrick Mahomes – style pass to Jake Roberts who made a fantastic one-handed snare and carried the ball to pay dirt from 21-yards out.

Smithdeal pulled the point-after just wide left of the uprights and the score was now in the Cyclones favor 13-7.

Greeneville appeared to be marching toward tying or taking the lead but the Cyclone defense rose once more to stop the Greene Devils on fourth down with a little over six minutes on the clock.

From that point, the Cyclones went on a drive of the season as Rollins continued to punch away with four, five, and six-yard carries which the Greeneville defense didn’t have an answer for.

Forced to use their two remaining timeouts to stop the clock, the play of the game came on a fourth and two when a Rollins hard-count forced the front line of the Greene Devils to jump offsides to give the Cyclones a first down with all remaining to do was to take a knee on a couple of plays to run out the clock and send Cyclone Nation, players, coaches, and cheerleaders into a frenzied celebration.

For the game, the Cyclones recorded 18 first downs to 10 for Greeneville. Rollins was 11-of-15 passing with 100 yards and the score while carrying the ball 39 times for 185 yards.

The Cyclones finished the game with 299 total yards to 230 for the Greene Devils. Greeneville speedster Mason Gudger was held in check for the most part toting the football 17 times for 82 yards. Quillen finished the game 12-of-19 through the air for 135 yards.

Roberts was on the receiving end of eight passes for 77 yards and the score.