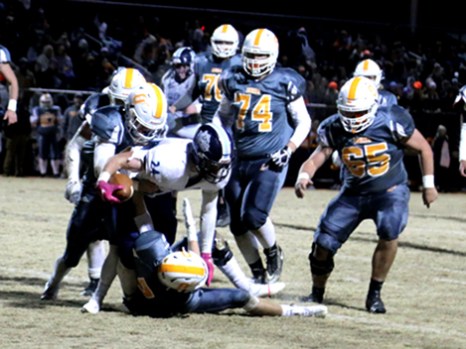 File Photo/Nic Miller Hampton's Morgan Lyons picks up tough yards against the Oneida defense. The Bulldogs have a showdown with Trousdale County Friday at 7 pm in the Class 2-A state semi-finals. 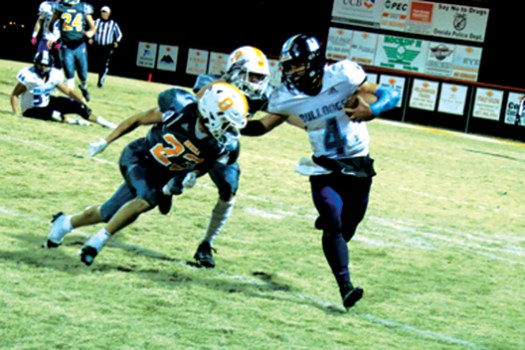 BY NIC MILLER
STAR STAFF
nic.miller@elizabethton.com
To start the 2021 football season, the Hampton Bulldogs came out and defeated a top team in Class 3-A, the Pigeon Forge Tigers in a thriller, 20-14.

Now, the Bulldogs have a shot at an appearance in the 2021 TSSAA Blue Cross Bowl, as they will play against the Trousdale County Yellow Jackets in the Tennessee state semifinal round.

The best part, Hampton fans do not have to go far, as the Bulldogs will have home-field advantage in the fourth round, something head coach Michael Lunsford says is a reward for how well his team has performed throughout the postseason.

“When we looked at the season at the beginning of the year, we wanted to win the region in hopes of being able to have four straight home playoff games. We had to take the long way around with two road games, and you can’t win those games without having mature kids who conduct themselves in a professional manner, which we do.”

This 2021 Hampton squad is only the fifth team in school history to make it to the state semifinals, and it as an accomplishment that the whole community is proud of.

“These guys have showed up and come to work every day, and it starts to become a long road when you play this many games. These guys on the field are chomping at the bit, and it is big for the community because we are lucky to have this opportunity to make it this far.

“It’s very special for us because games of this magnitude don’t come around that often. So when we get an opportunity like this, we want to take full advantage of this opportunity and put our best foot forward,” Lunsford said.

And having the home-field advantage will be useful this week, as Trousdale County comes into the game heavily favored as the second-ranked team in Class 2-A. However, Lunsford knows that football is played on the field, and not on paper.

“We have felt like there have been multiple games this year that we have been the underdogs, and any time that we are on the road we feel like we are the underdogs. Going into this one and having this opportunity at home, we are excited about it.”

Being one game away from the state championship game, intensity is at its peak, and the Bulldogs have shown that they are prepared for a moment like this time and time again.

“It’s a cliche when you say to take it one game at a time and one play at a time, but now we are taking it one practice play at a time. The physical practices are over for the most part over, and it is mental at this point as we are making sure that we are perfecting everything so we are ready to go on Friday night,” Lunsford said.

Throughout the playoffs, the Hampton defense has stood tall, allowing only 25 points throughout the first three rounds of this year’s playoffs. Lunsford spoke on how important it is for his team to continue their dominant performance in this week’s contest.

“I think that defense is the key in this one. I think we’re gonna find ways to move the ball and do what we do best, but we have to make plays on defense so we can stop them and have our opportunity on offense.”

In terms of offense, the Bulldogs lean heavily towards the run game, something Lunsford said that fans can expect again this week, saying, “We will see a lot of the run this week, because that is what we are good at, we are going to put our kids in the best situation that we can to win this ball game.”

With there being three Carter County football teams hosting state semifinal contests this Friday, Lunsford said that it speaks volumes to how special this area is.

“It is huge for the county and speaks to the type of people that we have here, people that are hard-nosed and ready to come to work. Like I told the guys before the Oneida game, on the field you are not handed or given anything and you have to take what you want, which I think is a good representation of Carter County.”

An exciting upcoming matchup, the state semifinal match-up between Trousdale County and Hampton is set to kick off at 7 p.m.. at J.C Campbell Stadium located at Hampton High School in Hampton.